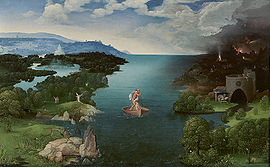 Joachim Patinir, also known as Joachim Patenier (Dinant, Namur, Belgium, ca. 1480 – Antwerp, 1524), was a Flemish Northern Renaissance landscape painter and draftsman. He became influenced by the Antwerp School of the Dutch Renaissance painter Gerard David and also traveled to Italy to study this art. Patinir is considered the first Western artist known to have specialized in landscape painting; a pioneer in this genre, however his landscapes are not a separate subject but supported by religious themes. He incorporated precise observation of nature in his artworks. Patinir's landscapes were among the first small horizontal panels of any sort as paintings were almost always vertical in format before 1520.

Described by Albrecht Dürer at the outset of the Renaissance as “the good painter of landscapes”, Patinir was considered the first modern painter to specialize in this genre... Patinir gained a pre-eminent role in which the combination of detailed observation from life and imaginative and fantastical interpretation brought him close to the work of other Flemish painters known for their striking styles, such as Hieronymus Bosch and Pieter Bruegel the Elder. [1]

"Landscape with Charon Crossing the Styx" is one of his most famous paintings. This work is an example of "World landscape", a panoramic imaginary view from a very high viewpoint that includes mountains, water (lakes, the sea), forests and fields, and small figures from a Biblical or historical narrative. It first appeared in a painting of Patinir dated in the 1520s.