John Constable (1776-1837) was an English Romantic landscape painter of the late 18th and early 19th centuries. He is known for pastoral paintings such as Dedham Vale (1802 and 1828) (the area surrounding his home—now known as "Constable Country") and The Hay Wain (Landscape: Noon) (1821). His paintings are now among the most popular and valuable in British art, though he was never financially successful. He was elected to the Royal Academy at the age of 52 and sold more paintings in France than in his home country, England.

The Hay Wain is one of the most famous of all English paintings. In 1824, when it was exhibited at the Paris Salon, it caused a sensation and was awarded with a gold medal by Charles X of France. The painting is currently exhibited at the National Gallery of London.

Constable was largely self-taught, and developed slowly. In 1799 he was a probationer, and in 1800 a student at the Royal Academy schools. He exhibited from 1802 at the Royal Academy in London, and later at the Paris Salon. He influenced the Barbizon School and the French Romantic movement. [1] 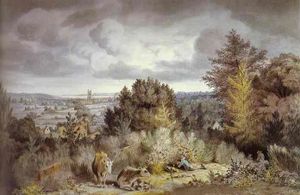