Portraiture is the art of making portraits. In painting a Portrait is an artistic representation of a person or sitter. The painter is aimed to represent the face and its expression, the likeness, personality, and even the mood of the person.

A portrait is typically defined as a representation of a specific individual, such as the artist might meet in life. A portrait does not merely record someone's features, however, but says something about who he or she is, offering a vivid sense of a real person's presence. [1]

Group portrait painters in Holland, such as Rembrandt and Frans Hals, radically transformed the beholder’s relationship to the work of art. Italian art based on internal coherence–that is, a clear hierarchy of the figures depicted in the painting—ran counter to the Kunstwollen (artistic volition) of the artists of democratic Holland, seeking these artists to maintain equality among the sitters. [2] The National Portrait Gallery in London was founded in 1856 to collect portraits of famous British men and women; the Gallery collections include over 195,000 portraits from the 16th Century to the present day. [3] The National Portrait Gallery in Washington, D.C. was founded in 1962; It is the only museum in the United States dedicated solely to portraiture. It houses around 21,000 works of art included works by artistic giants of the Dutch Century, as an iconic self-portrait by Rembrandt van Rijn, the quiet light-infused interiors by Jan Vermeer, striking portraits by Frans Hals, Judith Leyster, and Thomas de Keyser. The Education Department uses history and the arts as a vehicle to introduce visitors to significant Americans in the Portrait Gallery's collection. [4]

Albrecht Dürer, as Rembrandt, made many self-portraits; the most celebrated is the one painted when he was 29 and was renowned throughout Europe. The portrait painter Charles Willson Peale exerted a major influence on American painting through his own work and that of his sons, brothers and nieces. [5] Diego Rivera, the Mexican best known artist, ca. 1936 did the famous portraits of Lupe Marín and of Ruth Rivera. A Rivera's mural for Rockefeller Center Man at the Crossroads, was destroyed by order of his sponsor because of the inclusion of a portrait of Lenin. A portrait of Miguel de Cervantes y Saavedra, 1600, is attributed to Juan de Jauregui y Aguilar. 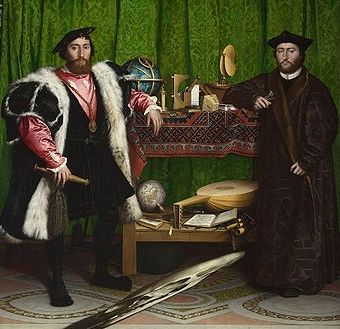 Hans Holbein the Younger, The Ambassadors, 1533. Ingres, Portrait of Napoléon on the Imperial Throne.