Rembrandt Harmenszoon van Rijn (Leiden 1606 - Amsterdam 1669) was the most acclaimed painter in the Netherlands and the greatest of the "Dutch Masters." He considered himself a religious painter, but he is most famous for his portraits. Rembrandt produced about 600 paintings, including his more than 90 self-portraits. He created 300 etchings, and an estimated 1,400 drawings. Most of his drawings look unfinished, but he stated "a drawing is finished when the artist has fulfilled his intentions." Some of his most famous paintings include Nightwatch (1642), The Syndics of The Cloth Guild (1662), Bathsheba at Her Bath (1654), Jacob Blessing the Sons of Joseph (1656) and Jewish Bride (1667). Rembrandt's paintings are known for their depiction of light and shadow (chiaroscuro). The increasing number of portraits by Rembrandt and others demonstrated the new emphasis on individualism in the Renaissance. Rembrandt literally paints his autobiography by means of some forty pictures, as well as thirty-one prints and numerous drawings.[1]

The last years of Rembrandt's life were spent in increasing poverty and sadness.[2]

Of all the Baroque masters, it was Rembrandt who evolved the most revolutionary technique and who seemed to grow into the Italians' spiritual heir.[3]

The Netherlands of the 17th century saw an extraordinary growth of artistic achievement, accompanied by great prosperity. Painters such as Rembrandt, Vermeer, Hals, De Hooch, and Ruisdael began to specialize in Portraiture, Landscape, Still life, and Genre painting. The Metropolitan Museum of Art, New York. 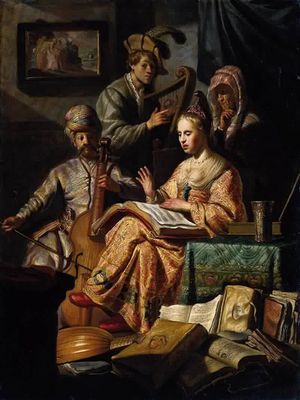