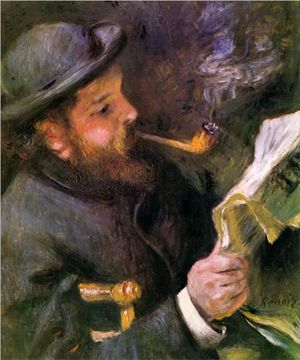 Claude Oscar Monet (1840–1926) was a French painter and the "founder of impressionism" who became known for his landscapes and for series of paintings showing changes under different aspects of light and atmosphere during different times of day and year. Some of the most well known of the series are "Water Lilies" and "Haystacks".

Monet may have become more Christian as he grew older, given that he painted images of the Crucifix and did multiple paintings of a church that were celebrated for their unique depiction of light.[1] Also, his best friend late in life was the priest at his local parish church in France, and his second wife was a devout Catholic.[1] Despite all this, Wikipedia prominently insists Monet was somehow an atheist without quoting any evidence in support.

His most valuable paintings are from his early period. His highest valued work, Le bassin aux nymphéas (1919), sold for $ 80.549 million, and the average sales price of Monet's works is $7.02 million.[2]

Oscar-Claude Monet was born November 14, 1840, in Paris, France, the second son of Claude-Adolphe and Louise-Justine Aubrée Monet (a singer).[3] When he was five years old his family moved to the Normandy coastal town of Le Havre, where he spent his childhood. His father worked as a grocer and ship chandler. Monet's mother died in 1857 when he was 17 years old.[4] His widowed childless aunt, Marie-Jeanne Lecadre, took him into her home.

Monet first became known in Normandy for his charcoal caricatures. In 1856 at Le Havre, Monet met an artist named Eugene Boudin who encouraged him to paint outdoors, try oil paint and pastels, and make nature his subject. Claude Monet completed his first painting in 1858 entitled View from Rouelles. [5] Next year, Monet entered Atelier Suisse in Paris where he first studied painting. There he met Camille Pissarro and Gustave Courbet. In 1860 he spent two years in compulsory military service in Algiers, until he became ill and returned to France.[6] At Le Havre he met Johan Barthold Jongkind, who completed the training that Monet had already received from Boudin. In 1862, he entered the studio of Charles Gleyre in Paris where he became friend with painters who would also become known as impressionists, Renoir, Sisley, and Jean-Frédéric Bazille. Leaving the studio of the famous Gleyre, he took a studio which he shared with Bazille. In 1869, Monet became the friend of Edouard Manet and joined him every evening in a café of the Batignolles, meeting also Paul Cezanne, and Degas.

In 1867 his first child, a son named Jean, was born to Monet and his girlfriend Camille-Léonie Doncieux. They were married 3 years later, in 1870. Between 1870 and 1871, Monet studied the works of John Constable and William Turner in London. There he met the art dealer Paul Durand-Ruel who later sponsored some of his exhibitions, and Pissarro. His second child, a son, Michel, was born in 1878. At that time Monet faced continuing financial difficulties and moved in with his former patron Ernest Hoschedé. Monet's wife Camille died of tuberculosis in 1879, and Monet and his children continued to live in the Hoschedé household.

Monet formed a group of artists in 1874 who called themselves the Société Anonyme des Artistes. Monet displayed his painting, "Impression, Sunrise", at the group's first exhibition, and the name impressionist was first used for his style of painting, and was applied to his group of painters as well, who became known as "impressionists".[7]

Monet continued to paint and his work became well known and popular, and by 1890, Monet had accumulated enough funds to buy his own house in Giverny, and added a water-lily garden and a Japanese bridge, that became the subject of several of his paintings (1906–26).

In 1892, after Ernest Hoschedé died, Monet and his widow Alice Hoschedé married.

With Georges Clemenceau and Alice Butler in June 1921.

During his later years, Monet's vision declined, and over time he became almost blind, but still continued to paint.

In 1918 Monet decided to donate twelve large canvasses of "Waterlilies" to France. He finishes them in 1926 at the end of his life.

Claude Monet died in his house at Giverny on Dec. 5, 1926 at the age of 86. He was buried in his family grave at Giverny, in the presence of Georges Clémenceau. His famous home and garden with its waterlily pond and bridge at Giverny are a popular draw card for tourists. In the house there are many examples of Japanese woodcut prints on the walls.

His paintings are shown in large galleries including the Louvre, the Marmottan, the National Gallery in London, and in the United States, at the Art Institute of Chicago and the Metropolitan Museum of Art in New York City.