From Conservapedia
(Redirected from Cross)
Jump to: navigation, search Rembrandt, The Raising of the Cross.

Crucifixion, derived from the Latin crux ("cross") and figere ("to fasten"), was an agonizing form of death famous as a means of execution in the Roman Empire. It involved the recipient being nailed to a cross and left to hang until dead. The victim, always a slave or criminal, never a citizen, was mercilessly flogged and then nailed to a wooden post with crossbeam.

At one time it was believed the nails were driven through the hands and the feet, but the modern view believes the nails were driven through the wrists. The nails were more dull than the sharp nails of today. The cross would usually be inclined slightly forward to further strain the body. The shoulders would become dislocated. Breathing was only possible by pushing up the legs which would cause excruciating pain in the nailed feet. Indeed, the word 'excruciating' comes from crucifying. Relieving the pressure on the feet by not pushing would once again cause breathing to be cut off. This cycle would continue until the condemned would finally die. Death could come over a course of days. Asphyxiation was the primary cause of death as the lungs would slowly fill with fluid although it was also possible to die of thirst, shock, or exhaustion. Sleep was impossible. Hallucinations during this gradual process of dying would be common.

After the slave revolt led by Spartacus was put down the insurgents were crucified by Crassius along the Appian Way at intervals of 100 feet for a distance of over 500 miles, and were never permitted to be buried.

The most famous victim of crucifixion was Jesus Christ, and to Christians the phrase the crucifixion refers specifically to his death. While the details of his crucifixion are not given are not given in the Gospel accounts, it is mentioned that the legs of the men being crucified next to Him were broken (most likely smashed with hammers) so they would die before the sabbath. With shattered legs they could no longer push themselves up and would soon die from not being able to breathe.

French surgeon Dr. Pierre Barbet postulated after World War II that crucifixion victims on a cross would experience sagging ribs, making it impossible for them to exhale properly. A 1986 article in the Journal of the American Medical Association states that the flogging of Jesus resulted in deep stripelike lacerations and significant blood loss, which probably resulted in hypovolemic shock and pleural effusion. This probably accounts for Jesus being too weak to be able to carry the crossbar to Golgotha without help. The hypovolemic shock and the marked difficulty in respiration, along with other contributing factors, were cited as the medical causes of Jesus' death.[1][2]

When Christianity became a legal religion within the Roman empire in 313 AD, crucifixion was abandoned. Other countries and areas of the world have used this form of punishment, but never to the extent as occurred during Roman times. 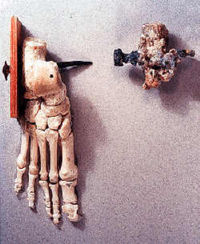 Modern demonstration of nail through the foot during a crucifixion (left); cast of the ankle bone of Johanan with embedded nail in place (right)

In 1968 an ossuary was found near Jerusalem at Giv’at ha-Mivtar, and contained the remains of Johanan ben Ha-galgol, who was crucified by the Romans sometime in the 3rd century, A.D. Among the evidence found was a 6-inch iron spike driven through the sides of his heels; the remains of an olive wood plank placed on his foot prior to nail being driven in was also found, evidently acting as a "washer" to prevent the victim from pulling his foot off the nail. Nail marks were also found on the inner portion of the radius arm bones, and both legs were broken as per Roman practice.[3]