Jesus Christ died on a Cross after suffering and giving up his spirit. The Cross of Christ, and the atonement He accomplished on it, are the very grounds that anyone who can be saved will be saved. The Cross is the best-known symbol of Christianity, called by Clement of Alexandria "the Lord's sign". In the earliest Christian life, as can be seen from the metaphorical language of the primitive faithful, the cross was the symbol of the principal Christian virtue, i.e. mortification or victory over the passions, and suffering for Christ's sake and in union with Him. [1]

The Sign of the Cross is a hand motion common in the religious devotions and worship services of Roman Catholic, Anglican, Orthodox, and some Lutheran Christians. It is from this original Christian worship of the cross that arose the custom of making on one's forehead the sign of the cross. Tertullian says: "Frontem crucis signaculo terimus" (De Cor. mil. iii), i.e. "We Christians wear out our foreheads with the sign of the cross." The practice was so general about the year 200, according to the same writer, that the Christians of his time were wont to sign themselves with the cross before undertaking any action. Ibidem

Medieval Christian churches were usually built according to a cruciform plan.

Many Christians wear a small pendant image of a simple cross or a crucifix as a devotion to Jesus, made of wood, metal, or other materials, sometimes jeweled, many of them quite beautiful.

Then Jesus said to his disciples, "If any of you wants to be my follower, you must turn from your selfish ways, take up your cross, and follow me." Matthew 16:24 (NIV) 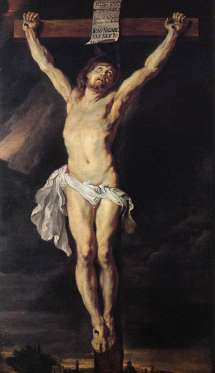 "The Lamb of God who takes away the sin of the world."

It is believed in Christian traditions that in 326 Helena, the mother of Constantine, discovered the Saviour's Tomb and His Cross. Helena and Constantine erected a magnificent basilica over the Holy Sepulcher... The earliest reference to the True Cross is in the "Catecheses" of St. Cyril of Jerusalem written in the year 348, or at least twenty years after the supposed discovery. Ibidem

Beginning in the early Middle Ages, Roman Catholic depictions of the cross have usually included a representation of the body of Christ still on the cross. This is known as the crucifix and brings emphasis to the sacrifice and suffering of Christ. Protestant churches tend to portray the empty cross, emphasizing the resurrected, risen Christ. [1] Many Protestants oppose the crucifix, citing Exodus 20:4, with its ban on "graven images" existing in the Ten Commandments, but the crucifix is commonly used by Anglicans, Lutherans, and some other Protestant Christians who together constitute a large percentage of the world's Protestants.

A crucifix is a cross with an image of Christ shown nailed.

St. Andrew, "the first-called" of the disciples of Jesus, was reportedly crucified by the Romans on an x-shaped cross at Patras, in 69 AD, as he did not feel worthy to be crucified on a cross like Christ was. [2] Rembrandt, Descent from the Cross. The Greek Cross is the most ancient cross. Crucifixion Scene from the Maestà Altarpiece, 1308-11. The Holy Crucifixion, painted in the middle of the XII c.