The early Christian paintings were the wall frescoes of the Catacombs of Rome. The earliest works tend to employ Christian symbols (e.g. bread, wine, or the fish symbolizing Jesus)... The Early Christian period also includes the earliest known European illuminated manuscripts. [1] The imagery of the catacombs consisted of cryptic, if not hermetic, symbols of the salvation of the soul: orans figures, parable incidents, Old Testament parallels such as Noah in the Ark. [2] 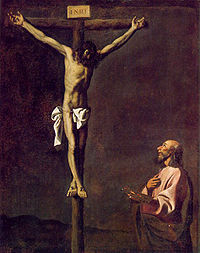 According to legend, St. Luke the Evangelist was also the first Christian painter, and had painted the Virgin Mary from life. As a consequence he was the patron saint of painters. [3] During the Middle Ages and the Renaissance, The Roman Catholic Church and The Orthodox Church supported the production of sacred art; outstanding painters were Giotto di Bondone, Hans Memling, Pietro Perugino, Albrecht Dürer, Leonardo da Vinci, Michelangelo, and Raphael. In the Medieval painting it was the Byzantines who determined how to depict human figures... the driving concern of the Byzantine style is the awe-inspiring presentation of holy figures, and to this end they are portrayed in hieratic (stiff and formal) postures, halo-crowned and serene of expression. [4] The Renaissance; "The fact is that at no period was religious artistry so fruitful; no other has bequeathed to us so many altarpieces, oratory pictures, Madonnas and saints. It was the age of countless pictures for pious confraternities, and it is quite probable that the artist, who was so often a member of the confraternity, infused something of his heart into his work." [5]

In Modern Times main Christian painters were, among a long list, El Greco, Nicolas Poussin, Francisco de Zurbarán, Anthony van Dyck, Bartolomé Esteban Murillo, Cristóbal de Villalpando, Miguel Cabrera and Salvador Dalí. One who succeeds in arousing emotion is Eugene Delacroix, whose "Christ on Mt. Olivet" (1827), "Descent from the Cross" (1834), "Good Samaritan" at Mantua, "Christ Stilling the Tempest" (1849), and especially his Chapel of the Angels in the church of St. Sulpice (19th century), are examples of immortal passion and poetry. Ibidem Delacroix painted fourteen versions of the story "Christ Asleep during the Tempest while crossing the Lake of Gennesaret". Heinrich Hofmann (1824 - 1911) painted four of the most famous Christian works; his painting, Christ in Gethsemane (1890), is one of the most copied in the world. Warner Sallman (Chicago, 1892 – 1968), a Christian painter, made The Head of Christ, a well known portrait of Christ of which more than 500 million copies have been sold. [6] The Last Judgement by Hans Memling. The Eternal Father painting the Virgin of Guadalupe attributed to Joaquín Villegas. The icon of the Trinity by Andrej Rublëv. The Seventh Plague by John Martin. Bartolomé Esteban Murillo, The Return of the Prodigal Son, 1667-1670.
Retrieved from "https://conservapedia.com/index.php?title=Christian_paintings&oldid=1262376"
Categories: