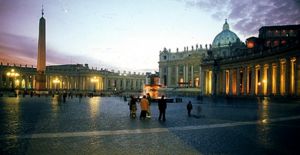 The Piazza of St. Peter's.

Rome (Italian: Roma) is the capital city of Italy, as well as its most populous city. Rome is located on the western side of the Italian Peninsula, on the east of the Tiber River. The total population of Rome is approximately 2.8 million. The territory of the independent state of the Vatican is entirely contained within Rome. It is the third most-visited tourist destination in the EU.[1]

Rome is best known as the capital of the Roman Republic and Roman Empire, and was quite possibly the most important city in the world during the Pax Romana. Rome has been an urban centre for more than 2000 years. Most of the monuments of the city's history still stand. The historical centre is a small area, mostly located on the eastern (left) bank of the Tiber, enclosing the traces of a neverending history that dates back to the oldest times and was steadily rennovated by great Roman characters, such as the emperors, nobles, wealthy families, and popes. Each of them left an indelible and lasting sign of its importance. That is why the monuments of Rome's past greatness are, for the most part, within the historical centre, in stark contrast to the modern districts. Having been for long the major city of Europe, Rome has become an unparalleled repository of monuments of all the periods, from the Etruscan to modern times. [2]

Famous buildings in Rome include the Colosseum, Saint Peter's Basilica, and the Pantheon. Rome has more fountains than any other city in the world. Basilica of St. Ambrosio and St. Carlos.
The Christian churches in Rome are several hundred and their history is intertwined with the history of religious, social and artistic city. The most imporant are: the church of San Giovanni in Laterano, the basilic of San Paolo and the Basilic of Saint Paul Outside the Walls and the basilica of Santa Maria Maggiore.

Of all the Rome City fountains, the Trevi Fountain is by far the most famous. With its impressive statue of Triton in all of his glory, one would be shocked to learn that a Pope actually commissioned this great piece of art. Clement XII wanted to rebuild the area in which the fountain is now in, and the fountain alone took over thirty years to finish. It is a breathtaking site that still holds visitors in awe of the fusion of marble and art. (Source: EzineArticles.com)

Rome owes its Baroque aspect of today to the 17th–century popes Urban VIII, Innocent X, and Alexander VII, who became patrons of the greatest exponents of this style, such as Gianlorenzo Bernini and Francesco Borromini. [3]