Babylon was the main city of ancient Mesopotamia, located in modern Iraq. Hammurabi was Babylonia's greatest ruler during roughly 1800-1750BC. 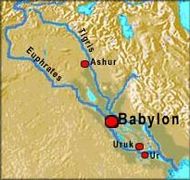 The region between the rivers Tigris and Euphrates was the center of the Sumerian civilization before 3500 BC. The Sumerians built cities and irrigated their land. They had a legal system and even a form of postal service. They developed a form of writing called cuneiform, based on wedge-shaped symbols made by pressing a stylus into tablets of wet clay, and a system of counting using base 60.

The Babylonians invaded Mesopotamia and defeated and replaced the Sumerian culture around 2000 BC, establishing their capital at Babylon around 1900BC. They adopted many Sumerian customs, such as cuneiform writing and mathematics using base 60.

Noah was saved from the Great Flood by the Ark, together with his wife, his three sons and their wives. His sons were named Shem, Ham and Japeth. The bible relates the descedants of Shem, the elder brother of Japeth[1], as five sons: Elam, Asshur, Arpachshad, Lud and Aram[2]. Flavius Josephus relates the national genealogy of the children of Shem, or Semites:

Shem...had five Sons, who inhabited the land that began at Euphrates, and reached to the Indian Ocean. For Elam left behind him the Elamites, the ancestors of the Persians. Ashur lived at the city Nineve; and named his subjects Assyrians: who became the most fortunate nation, beyond others. Arphaxad named the Arphaxadites, who are now called Chaldeans. Aram had the Aramites; which the Greeks call Syrians: as Laud founded the Laudites, which are now called Lydians.[3]

In 625 B.C., the Chaldean chieftain Nabopolassar conquered the city of Babylon and began the Neo-Babylonian Empire, his reign culminating in the conquering of the Assyrian Empire in 609 B.C.

The Legend of the Hanging Gardens of Babylon

The Hanging Gardens of Babylon were terraces that may not have existed. They were described by Greek historians including Berossus and Diodorus Siculus, who apparently never saw them. There are no Babylonian records of them, even on tablets from the time of Nebuchadnezzar II (604-562 BC), although there are tablets describing his palace, the city and the walls. The legend may have been spread by the soldiers of Alexander the Great, who were impressed by the fertility and beauty of Mesopotamia, and told stories about gardens and the palace of Nebuchadnezzar, the Tower of Babel and ziggurats. These may have got mixed together and garbled to produce the fabled Hanging Gardens.

Today we count in base ten, but the Babylonians counted in base 60. This may sound cumbersome but there is an intriguing explanation of how this might have worked. The prevalent theory is that Babylonians counted the bones of each finger on one hand using the thumb on the same hand as a pointer. Doing this, you start at the top of your little finger and count down the bones 1...2...3.. then move on to the next finger 4....5....6.. then the next 7....8...9 and finally the index finger 10...11...12. Having got to 12 you count this off as one '12' on the other hand and go back to the beginning. You do this five times, with twelve bones per time, meaning you can count to 60 on two hands without having to write anything down. You could also count each '12' on each finger bone of the spare hand, allowing you to count to 144 easily.

This old Babylonian numbering system is likely to be the reason why we still have unusual base systems for things like time (hours, minutes and seconds), 24 hours in the day, the old Imperial measurement system etc. The beauty of this system is that numbers which are multiples of 12 (such as 24, 60, and 144) are all also divisible by 2, 3, 4, and 6, whereas 10 is only divisible by 2 and 5 - so it's easier to count halves, quarters and thirds in a base 12 system.[4]