Thessalonica[1] (thes-sal-on-ee'-kay, Greek: Θεσσαλονίκη - modern-day city of Thessaloniki)[2] was a large and prosperous ancient city located in northern Greece and was the capital of the Roman province of Macedon, founded by the Macedonian general and king Cassander in 316 BC. It was a major trade route in its time, one of the most important cities of the ancient Byzantine Empire, second only to Constantinople, and its importance attracted figures like the emperor of Rome Galerius, Cicero, Lucian, and is probably most well-known today for being the subject of two letters by the early Christian Paul known today as I Thessalonians and II Thessalonians.

The origins of the name Thessalonica can be traced back to its founding in 316 BC by the Macedonian king Cassander, whom named the city after his wife, Thessalonike. 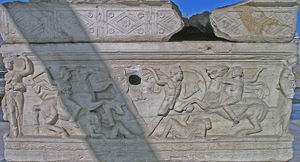 In the late fourth century BC, the Macedonian general and king Cassander abolished all previous settlements in the region in order to unify the region into a single political unit, which became the city of Thessalonica. It was geographically strategically located by the Thermaic Gulf, where lucrative trade routes from the city of Byzantium and the Danube basin met. Because of its advantages, it immediately replaced Pella as the most important port of Macedonia, thus leading to massive fortifications being almost immediately built around the city. In 273 BC, it was utilized as a base in order to launch attacks on Pyrrhus, the king of Epirus.

During the Macedonian Wars, it was able to successfully prolong sieges by the Roman Empire. However, this success did not last long, when soon after the Macedonian defeat at the Battle of Pydna, it was conquered by the Romans. However, despite its fall to Roman rule, it continued to economically prosper. After the Romans defeated the Macedonian monarchy, Thessalonica soon became the capital of the province of Macedon in 148 BC. After Cicero was exiled from Rome, he lived in Thessalonica in 58 BC. Then, after receiving many tax exemptions by the Romans, the prosperity of Thessalonica was exemplified, as is especially attested to by its up-heal in production of coins.

In 250 AD, under the reign of the emperor Decius, Thessalonica became a colony of Rome. After Galerius became emperor, and his victory over the Narses, he celebrated by building a triumphal arch in Thessalonica, a structure that continues exists until this day. Thessalonica continued to benefit during this reign with numerous construction and building projects being commenced at the site. At the time of the Byzantine Empire, Thessalonica continued to greatly flourish, and second to Constantinople as the most important city in the entire empire. As many centuries came by, the fortifications at Thessalonica were rebuilt and even extended, and was thus able to withstand attacks from the Slavs in the 6th and 7th centuries AD.

Letters to the Thessalonians

Without a doubt, the ancient city of Thessalonica is most famous today for being the subject of two letters sent by the early Christian Paul, which have become some of the most widely distributed and studied documents in all of history since their canonization into the Bible, and are agreed to be by the majority of specialists to be of the pen of Paul himself.[4][5] As is revealed by the name, the letters of I Thessalonians and II Thessalonians were written to the church of Thessalonica. Paul praises the Thessalonians for their devotion to God and Jesus Christ by proclaiming that their "faith in God has become known everywhere."[6]