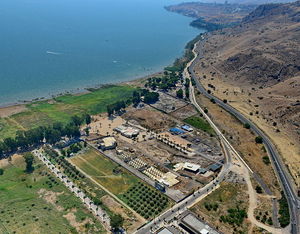 Magdala (or Magadan, Greek: Μαγδαλά, meaning 'place where fish are salted')[1] was an ancient city located between Tiberias and Capernaum, and is mentioned in the New Testament, most well known for being the hometown of Mary Magdalene, the women whom Jesus cast seven demons out of. Magdala is explicitly mentioned only once in the Gospels, in Matthew 15:39. Jesus was said to have entered into the vicinity of Magdala after the feeding of the 5,000. The city of Magdala can also be known by its Greek name, Taricheae. The ancient city of Magdala is spoken of by early historians such as Flavius Josephus, Cicero, Suetonius and Strabo. According to Josephus, the population of Magdala was about 40,000.[2]

Magdala is only once explicitly mentioned in the New Testament, in Matthew 15:39, and is mentioned several times as the region where Mary Magdalene was from.

Matthew 15:39: After dismissing the crowds, He got into the boat and went to the region of Magdala.

Magdala (located near present-day Migdal) is on the Western coastline of the Sea of Galilee and at the eastern foothills of Mount Arbel. The excavations at Magdala have uncovered a large marketplace with 28 shops, about 300 fishing weights, 40 pools, over ancient 4,000 coins, the majority minted within the walls of Jerusalem, and a harbor. These findings indicate that Magdala was a major economic site in its time, engaged in widespread and large-scale commercial interactions and trade with other ancient cities, from Caesarea Maritima and as far as the borders of Europe.

The Greek name for Magdala is Taricheae (meaning salted fish), because salted fish "became the city’s international 'brand,' since pickled fish was sold to Rome."[3] Indeed, Magdala's geographic location being situated beside the Sea of Galilee lead to fish becoming the primary economic venue of Magdala, a commodity that was coveted from this ancient site from many of its neighbors and trading partners. The ancient historian Strabo wrote "At the place called Taricheæ, the lake supplies the best fish for curing."[4] The Magdala Archaeological Project has also uncovered a 700-meter port in Magdala, capable of accommodating for several boats for their fisheries. Fish however, was not the only industry of the ancient town, as Ruth Jackson, a specialist in ancient glass and an adviser to the Magdala Archaeological Project, found in Magdala evidence that glass production was present at the site. Evidence of glass manufacturing has been found, such as glass waste, glass sticks, and over 1,800 pieces of glass materials.

Between 60-40 BC, as Magdala's economy started to expand through increasing fish trade with the Romans, Magdala transitioned from a small village into a prosperous city, known for both its fish salting and boat-building.[5] It remained the largest urban center in the western coast of the Sea of Galilee until the establishment of the ancient city of Tiberias in 19 AD.[6] According to the Jewish historian Josephus, Magdala approached forty thousand inhabitants towards the middle of the first century AD. Magdala's fortunes would not last however, as it also become an important site for Jewish rebels during the Great Jewish Revolt of 66-73 AD. Eventually, Roman forces led by Vespasian laid siege to the city, captured it, and slaughtered many of its inhabitants. The Jewish historian Josephus narrates the siege and slaughter of the city of Magdala;

As soon as ever Titus had said this, he leaped upon his horse, and rode apace down to the lake; by which lake he marched, and entered into the city the first of them all, as did the others soon after him. Hereupon those that were upon the walls were seized with a terror at the boldness of the attempt, nor durst any one venture to fight with him, or to hinder him; so they left guarding the city, and some of those that were about Jesus fled over the country, while others of them ran down to the lake, and met the enemy in the teeth, and some were slain as they were getting up into the ships, but others of them, as they attempted to overtake those that were already gone aboard. There was also a great slaughter made in the city, while those foreigners that had not fled away already made opposition; but the natural inhabitants were killed without fighting; for in hopes of Titus’s giving them his right hand for their security, and out of a consciousness that they had not given any consent to the war, they avoided fighting, till Titus had slain the authors of this revolt, and then put a stop to any farther slaughters, out of commiseration of these inhabitants of the place. But for those that had fled to the lake, upon seeing the city taken, they sailed as far as they possibly could from the enemy.[7]

The city of Magdala remained until the fourth century AD, when the earthquake of 363 ruined Magdala and many other regional settlements of the time.

Magdala has been the subject of numerous important archaeological discoveries, including a first-century Jewish synagogue, as well as the finding of the Magdala Stone, considered by many to be one of the most important single archaeological findings in the last 50 years.[8] Magdala was well known for being the home of not only Mary Magdalene, but the ancient Jewish historian Flavius Josephus.[9]