Mary Magdalene (Mary who is called Magdalene, Μαρία ἡ καλουμένη Μαγδαληνή)[1] was a disciple of Christ from the town of Magdala.[2] She appears in all four Gospels in the New Testament. Mary came with Jesus on his journey to Jerusalem and witnessed his crucifixion.[3] She was also the first person to see that Jesus had resurrected.[4] Jesus cast 7 demons out of her by the power of the Holy Spirit.[5]

The New Testament does not mention her beyond the Gospels. It should be noted that the view of Mary Magdalene as a prostitute is not found within the Bible or the writings of the early church fathers. It is possible that she had a son named Mark who tagged along with her and later wrote the Gospel of Mark, although it seems unlikely that Mark would have described his own mother as "Mary Magdalene."

"Magdalene" is probably a nickname simply to distinguish her from the others also named "Mary". "Magdalene" is derived from the name of her town, Magdala. 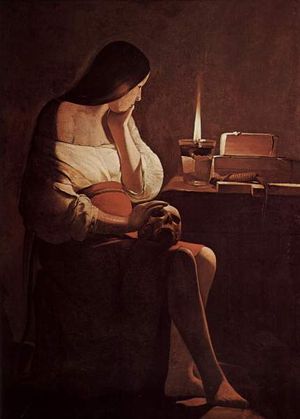