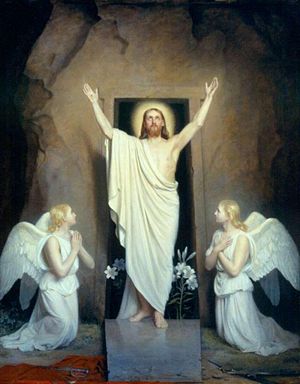 The Resurrection of Jesus Christ was a singular event in history where Jesus was brought back from the dead by God the Father three days after his crucifixion and death on the cross, according to The Gospels. This event is celebrated by Christians worldwide on Easter. The Christian apologist Michael Horner of CRU has an excellent resource which offers a defense of the resurrection of the Jesus Christ entitled Did Jesus really rise from the dead?. In addition, Dr. Gary Habermas offers an online audio library which defends the resurrection of Jesus Christ.

It was soon after the darkest hour, not three days had passed. Women were weeping, men had turned their faces away. All his followers assumed they would never see Him again.

The time for burial was approaching, and two different groups of women came. But the angels appeared, saying, "He is not here; he has risen!" (Matt. 28:6)

"Jesus Christ was the first person to be resurrected on this earth. Others had been brought back from death, but were restored to mortality (Mark 5: 22-43; Luke 7: 11-17; John 11: 1-45). whereas a resurrection means to become immortal, without blood, yet with a body of flesh and bone." [1]

"That Christ should suffer, and that he should be the first that should rise from the dead, and should shew light unto the people, and to the Gentiles." (Acts 26:23)

"And he is the head of the body, the church: who is the beginning, the firstborn from the dead; that in all things he might have the preeminence." (Colossians 1:18)

"And from Jesus Christ, who is the faithful witness, and the first begotten of the dead, and the prince of the kings of the earth." (Revelations 1:5)

"And when the sabbath was past, Mary Magdalene, and Mary the mother of James, and Salome, had bought sweet spices, that they might come and anoint him.
And very early in the morning the first day of the week, they came unto the sepulchre at the rising of the sun.
And they said among themselves, Who shall roll us away the stone from the door of the sepulchre?
And when they looked, they saw that the stone was rolled away: for it was very great.
And entering into the sepulchre, they saw a young man sitting on the right side, clothed in a long white garment; and they were affrighted.
And he saith unto them, Be not affrighted: Ye seek Jesus of Nazareth, which was crucified: he is risen; he is not here: behold the place where they laid him." (Mark 16:1-6)

The Twelve Apostles taught that Jesus had risen from the dead.

"After His suffering, he showed himself to these men and gave many convincing proofs that he was alive. He appeared to them over a period of forty days and spoke about the kingdom of God" (Acts 1:3).

"For what I received I passed on to you as of first importance: that Christ died for our sins according to the Scriptures, that he was buried, that he was raised on the third day according to the Scriptures, and that he appeared to Peter and then to the Twelve. After that, he appeared to more than five hundred of the brothers at the same time." (1 Corinthians 15:3-8)

The Ascension of Our Lord, which occurred 40 days after Jesus Christ rose from the dead on Easter Sunday, is the final act of our redemption that Christ began on Good Friday. On this day, the risen Christ, in the sight of His apostles, ascended bodily into Heaven (Luke 24:51; Mark 16:19; Acts 1:9-11).[2]

The Meaning of the Resurrection for Christians

The Fact of the Resurrection of Christ is a key element of the preaching of the message about Jesus and an essential of Christian belief. But there are also certain effects that this belief has on the lives of believers.

1. It is because Jesus rose from the dead, that believers now can resort to a living Savior to help and deliver them from sin and from situations overwhelming for them by their own powers.

2. The New Testament sees in the resurrection of Christ a certain vindication of what apparently to the world and to all beings was a failure and an overcoming of Him by His crucifixion. He was "declared to be the Son of God" by His resurrection. This brings believers in Him to a strong confidence in the determined power of God to both vindicate in their own lives and to bring His reign upon earth.

3. The coming of Jesus back to life means to the believer that, indeed, their sins are totally forgiven. This is because believers know that His death was as a payment for sins - a "wage of death" for our sins that He received in our stead. If He remained dead, believers would know that the wage had not been fully paid. His resurrection, carries with it our knowledge that our sin with its attendant death has been totally and finally paid for.

4. It is a now living Savior that Christians know can go before them, can closely lead them through life - as He did when He was on earth. This makes following Him practical and real.

5. The New Testament reveals that it is the Risen Christ who received from the Father the Holy Spirit and He, through Himself ascended to the Father, has given the Holy Spirit to us. This gives the believer in Christ both the knowledge and the power to live a godly life, and live a life that can be an intimately and personally directed one.

6. The resurrected Christ was no mere reassembling of the molecules and particles of the Body that had been crucified. It was, indeed, a physical body, but one that was fully under the Spirit's control, guidance, and empowerment. It was a "spiritual body". Christians know that likewise, they will one day be granted the nature of a spiritual body, and full of health. They therefore are full of hope and consolations, and consider that even now in this life, there is an overcoming through Him, a restoration, and that tears, even now, are wiped away.

Defense of the resurrection of Jesus

For more information please see: Christian Apologetics and the Resurrection of Jesus Christ

In the field of the defense of Christianity, which is known as Christian apologetics, there have been many scholars who have provided numerous reasons for believing in the authenticity of the resurrection of Christ. For example, legal scholars, legal authorities, and eminent lawyers such as Simon Greenleaf, John Warwick Montgomery, Lord Darling, John Singleton Copley, Hugo Grotius, Lord Caldecote, J. N. D. Anderson, Lionel Luckhoo, and many others have asserted that western legal standards argue for the resurrection of Christ.[4] In regards to early Christianity, many people who claimed to be eyewitnesses to the resurrected Jesus voluntarily preached the news of this despite extreme persecution, and died for their efforts. Unlike the early members of most religions, these people had the opportunity to be direct eyewitnesses to what verified the claims of Christianity.

Occasionally, a defense of the Resurrection of Jesus comes from someone who does not claim to be a Christian. The following is taken from the book, "Jesus", written by an orthodox Jew, Professor Emeritus David Flusser, who headed New Testament studies Early Christianity and Judaism of the Second Temple period studies at the Hebrew University in Jerusalem, Israel. Flusser, no fundamentalist or evangelical in his approach to New Testament Scriptures, marveled at both the lack of faith and lack of good historical method of liberal Protestants:

I am convinced that there are reliable reports that the Crucified One "appeared to Peter, then to the twelve. Then he appeared to more than five hundred brethren at one time… Then he appeared to James, then to all the apostles." Last of all, he appeared to Paul on the road to Damascus (1 Cor. 15:3-8). When Jesus answered the high priest's question about his Messiahship with the words, "From now on the Son of man shall be seated at the right hand of the power of God," did he believe that he, too, would escape the fate that threatened him. Or, as it more likely, did he believe that he would rise from the dead? In any event, the high priest correctly understood that by Jesus' words he was confessing that he was the Messiah. Therefore Caiaphas said, "What need have we of further witnesses? You have heard it from his own mouth" (Luke 22:71). Jesus was taken straightway to Pilate. (From Chpt. 11: Death, pp. 154—155)