From Conservapedia
(Redirected from Easter)
Jump to: navigation, search 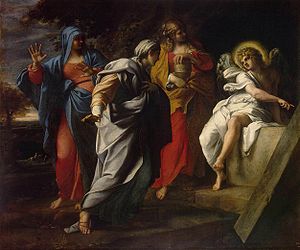 Annibale Carracci, The Holy Women at the Tomb of Christ, circa 1597-98.

Resurrection Sunday (popularly called Easter) is the Christian holiday celebrating the resurrection of Jesus Christ. In the Eastern Orthodox Church the celebration is known as Pascha.

The term used in Mexico is "Domingo de Resurrección," which translates as Resurrection Sunday. In the United States, many Christian churches continue to prefer the word Easter due to familiarity; however, Resurrection Sunday has gained favor in some Protestant churches in recent years, to counter the possibly pagan origins of the name "Easter."[1]

There are at least 12 separate occasions on which Jesus was seen after his Resurrection, including:

Many others, including Mark, had faith strong enough to believe without personally witnessing Jesus after his Resurrection.

It is by far the most important date in Christianity (even among churches which don't follow a liturgical calendar), due to the Resurrection being the event on which Christianity either stands or falls. Also, it is usually the date on which church attendance is the highest, resulting in churches often having additional services to handle the crowds (which also gives rise to the term "Easter and Christmas Christians" to define people who only attend on those days). Because Jesus rose from the dead at sunrise on Sunday morning, "sunrise services" are observed in some churches as well as in community gatherings.

Origin of the name "Easter"

The term "Easter" is likely derived from Eastre or Isthar, who was the pagan goddess of fertility for whom the Festival of Ishtar was celebrated each spring. Others suggest that the word comes from the Anglo-Saxon word for "passover". In biblical times the Jewish Passover, which commemorates the sparing of the Hebrew firstborns, was celebrated at roughly the same time as the vernal equinox or this "Easter" festival. The theory of pagan origin surmises that while the Gospel was being spread to the pagans, the celebration of Isthar/Eastre and the celebration of the resurrection became combined and the Christians adopted the name that the pagans had used for their festival.

Unlike Christmas, which falls on a specific calendar date (December 25 in the Roman Catholic and Protestant traditions; January 8 in the Orthodox ones), Easter/ Resurrection Sunday is considered a "moveable feast" in Christian liturgy, as its date depends on astronomical events.

The First Council of Nicaea in 325 AD set only two rules for its calculation: 1) that the date would be independent of the Hebrew calendar used by the Jews and 2) that it be held on a uniform date throughout all Christian churches.

However, the Council did not specify how the date was to be calculated; the computational process (formally called the comptus) took centuries to formally develop:

However, Eastern Orthodox churches use the Julian calendar to determine the date of the Paschal full moon, while Western churches use the Gregorian calendar. This results (most years) in differing dates for the two Christian branches.[3] Due to the complexity of the calculations, many websites exist which perform the calculation for both Orthodox and Western churches; one is provided in the External Links below which can also be used to determine the date of Passover.

The next Easter/Resurrection Sunday will be on April 9, 2023.

Use in determining other dates

Many Christian holy days are calculated based on when Easter/Resurrection Sunday is determined: