Angels are incredibly powerful servants of God. Angels announce the word of God,[1] protect God's people,[2] perform wonderful deeds,[3] and enforce God's will.[4] "Los Angeles" is Spanish for "The Angels."[5] Popular rock music references angels,[6] as do Christmas carols.[7] Polls show that "55% of Americans believe not just in angels, but that angels directly influenced their lives by protecting them from harm."[8] Popular movies featuring angels include It's a Wonderful Life (1946) and Heaven Can Wait (1978).

The first chapter of the Epistle to the Hebrews, probably spoken or written by Jesus,[9] explains his relationship to angels who were being discussed at Luke 24:23 when Jesus, initially unrecognized, joined the discussion on the road to Emmaus.[10] Angels are referenced repeatedly in connection with Jesus, such as after the Three Temptations of Christ, and in Matthew 24:36: “But of that day and hour no one knows, not even the angels of heaven, nor the Son, but the Father alone."[11] Angels were present both to witness the Creation of the universe, and to witness the Resurrection.[12] Jesus mentioned angels twice in Mark 13:27-32 , and Jesus explained that angels will gather for Hell the evildoers at the end of this era, see Matthew 13:40-42

Angels, often taking the form of men, can be incredibly forceful, as illustrated by their role in the destruction of Sodom and Gomorrah.[13] The words "angel", angel's" and "angels" are mentioned 295 times in the Bible.[14] The Old Testament features a few additional references to "cherub", a type of guardian angel. The Book of Revelation has 27 references to angel activity.[15] An angel rolled back and sat on the massive stone at Jesus's tomb.[16]

Angels may take human form in modern times as much as reported in the Bible. The mysterious carpenter who built the incredible Loretto spiral staircase was almost certainly an angel. Baseball Hall-of-Famer Roberto Clemente talked and acted like an angel (he had a superhuman throwing arm), and Clemente reportedly perished on a humanitarian mission without his body ever found (his crashed airplane was discovered). Other potential angels whose bodies were never found include Amelia Earhart, Mozart, Leonardo da Vinci, Alexander the Great, Glenn Miller, Rep. Larry McDonald, and Davy Crockett.[17] Shakespeare may have been an angel, in light of his miraculous work and unexplained partial disappearance from his unmarked grave.[18] Joan of Arc was guided by specific angels.[19]

The Epistle to the Hebrews indicates there are an infinite ("innumerable") number of angels.[20]

There is disagreement among biblical scholars as to whether or not the "sons of God" in Genesis 6:4 are angels.[21]

Though the popular notion of an angel is that of a celestial, vaguely human being with improbably bird-like wings, the original word in Hebrew is best translated as "messenger"; thus, it is possible that many of the angels featuring in the Torah were meant to be mortal human beings doing God's work, rather than an actual supernatural manifestation per se. Of course this is not always the case such as when an angel calls to Hagar "from heaven".[22] 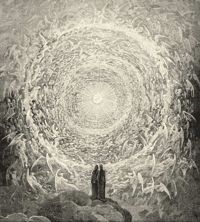 Cherubim is the plural translation of the singular form of the Hebrew word, "k@ruwb", pronounced "ker-oob", and is used 91 times in the Old Testament.[23] The suffix "-im" in Hebrew indicates the plural, whether referring to spirit messengers or names of various peoples or nations. Cherub is singular, cherubim is plural. The KJV reading "cherubims" is not proper. While Cherubim appear to be Angels, whether they are a distinct species of them is uncertain. The following traits about them are known, however:

Seraphim is translated from the Hebrew word "saraph", pronounced "saw-rawf", a word roughly translated meaning "burned" or "to burn", and is only used 9 times in the Old Testament.[27]

Although all spirits were created by God and therefore were originally good, at some point in time a large number of them rebelled against God and became evil, which is the implication regarding Matthew 25:41 . Biblically, the angels which did not keep their first estate, sinning, God cast into Hell and has reserved in eternal chains under darkness until the great day's Judgment. (Jude 1:6 , Peter+2%3A4&version=ESV 2 Peter 2:4 ) Given the account of this in Judges 9:8-15 and Ezekiel 31 , 'Eden' was not only a garden for the creation of mankind, but the original dwellingplace of the angels (Ezekiel 28:13 , 31+9&version=ESV Ezekiel 31 9 ), with a rebellion that began by many of the angels seeking a king to reign over them. The Fig Tree, Olive Tree, and Vine, each symbolizing an angel or type of angel, refused, while the bramble, Satan, became their leader. Sometime after the fall of the angels, Eden was destroyed and turned into a "desolate wilderness". (Ezekiel 36:35 , Joel 2:3 )

Sighting by many at Battle of Mons

An intense battle early in World War I occurred at Mons, Belgium, when British forces heroically withstood for a while far larger numbers of German soldiers. Many on both sides of this battle report seeing an angel appear on the battlefield to help the British, causing horses of the German army to turn and retreat.[8]

There have been many movies featuring angels,[28] mostly about the good kind but some concerning fallen angels.