Lawrence Patton "Larry" McDonald (April 1, 1935 — September 1, 1983 (likely[1])) was a conservative Democrat member of the United States House of Representatives who represented the seventh congressional district of Georgia. He was onboard Korean Airlines Flight 007 when it was shot down by Soviet interceptors just west of Sakhalin Island on September 1, 1983.

Although he was a Democrat, McDonald was a prominent movement conservative, one of the most conservative members of Congress of either party, and had served as the president of the John Birch Society. He was the only member of Congress killed by Communists during the Cold War.

McDonald was born on April 1, 1935 in Atlanta, Georgia.[2] His family was "a family of physicians", and he was a cousin of General George S. Patton.[2] He graduated from Darlington High School, a nondenominational school, in 1951, and in 1953 he graduated from Davidson College with a degree in history.[2][3] After that, he attended Emory University School of Medicine, graduating in 1957, did training at Grady Memorial Hospital for urology in Atlanta.[2]

From 1959 to 1961, McDonald served in the U.S. Navy as a flight surgeon, being stationed at Keflavik naval base in Iceland.[2] It was in Iceland that McDonald would learn about and grow to strongly oppose Communism.[2] He worried that the policies of the U.S. were helping to further Communism and its goals.[2]

After he left the Navy, McDonald practiced medicine at the McDonald Urology Clinic in Atlanta and did his postgraduate training in urology at University of Michigan in Ann Arbor, graduating in 1966.[2][3]

During his time practicing medicine, McDonald become more interested in politics, and he would eventually join the John Birch Society in 1966.[2] At the same time, he became active in a number of other organizations, including being chairman of the Georgia State Medical Education Board from 1969 to 1974.[2]

In 1972, McDonald unsuccessfully ran for Congress.[2] He ran again in 1974, facing Democrat incumbent John W. Davis in the primary.[2] McDonald emphasized school integration programs during his campaign, which he strongly opposed and which his opponent supported.[2] McDonald won the primary and faced Republican J. Quincy Collins Jr., who was an Air Force POW during the Vietnam War.[2] McDonald narrowly won the election and took office on January 3, 1975.[2] He would go on to win his re-election campaigns with wide margins.[2]

Even though McDonald was a Democrat, he was very conservative, being even more conservative than many, if not most, Republicans.[2] He received a perfect score of 100 from the American Conservative Union every year expect 1978, when he received a 95.[2] In addition, he received high ratings from other conservative organizations including the National Right to Life Committee, Gun Owners of America, and the American Security Council.[2] In fact, in a survey done by the American Journal of Political Science, McDonald was rated as the second most conservative member of either the U.S. House or Senate between 1937 and 2002, only behind Ron Paul.[4]

McDonald was so conservative that in 1978 the 7th District Democratic Committee (the district he represented) "voted 10–8–1 in favor of a resolution that would censure McDonald 'for the dishonorable and despicable act of calling himself a Democrat.'"[2] Various reasons for this was McDonald's membership in the John Birch Society, his refusal to support Jimmy Carter's presidential candidacy, not believing that there were implied powers in the Constitution, and allegedly using "misleading advertisements during his campaigns."[2]

In 1976, the American Party approached McDonald about running for President on its ticket, but he declined.[2] In 1983, he became the second president of the John Birch Society.[2]

Besides having a consistently conservative voting record, McDonald was one of the most outspoken opponents of Communism in Congress. For example, he opposed creating Martin Luther Ling Jr. Day due to his alleged association with Communism.[2] He also opposed what he believed to be a conspiratorial attempt by powerful elements within U.S government and business circles to further a one-world socialist society within America:

"The drive of the Rockefeller family and their allies is to create a one-world government, combining super-capitalism and Communism under the same tent, all under their control ... Do I mean conspiracy? Yes I do. I am convinced there is such a plot, international in scope, generations old in planning, and incredibly evil in intent."[5]

Committee and association membership and involvement

While serving in the U.S. Navy in Iceland, McDonald met and married his first wife, Anna Tryggvadottir.[2] They had three children together, but they divorced in 1975.[2] McDonald met his second wife, Kathryn Jackson, while giving a speech in California.[2]

McDonald had planned to arrive in Seoul, Korea, in order to attend the ceremonies for the 30th anniversary of the U.S.-Korea Mutual Defense Treaty. Also attending the ceremonies were Senator Jesse Helms of North Carolina, Senator Steven Symms of Idaho and Representative Carroll J. Hubbard Jr. of Kentucky. These three were aboard KAL 015 which flew 15 minutes behind KAL 007. Both planes refueled and took on food at Anchorage, Alaska. Senator Helms had contemplated joining McDonald on KAL 007 for the second leg of the journey but decided against it. McDonald remained asleep in first class the whole time that KAL 007 was at the Anchorage, Alaska airport. He was seated in First Class at seat 02B.

Here is a photo of Larry McDonald among seventy of the 269 passenger and crew photos assembled for the Life Magazine edition of the week after the shootdown ("Passenger and crew breakdown" at the bottom of the article, the bottom photo of the third column to the left). 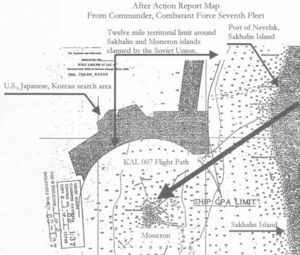 Moneron Island, the only land mass in the Tatar Strait

Immediately after KAL 007 was reported missing, there was a report conveyed via telephone by Orville Brockman, the Washington office spokesman of the Federal Aviation Administration, to Tommy Toles, the press secretary of Rep. Larry McDonald. This report was that the FAA representative in Tokyo, Dennis Wilhelm, had been informed by a Mr. Tanaka of the Japanese Civil Aviation Bureau (Counter-part to the FAA) that "Japanese self-defense radar force confirms that the Hokkaido radar followed Air Korea to a landing in Soviet territory on the island of Sakhalinska S-a-k-h-a-l-i-n-s-k-a and it is confirmed by the manifest that Congressman McDonald is on board". This report would indicate that KAL 007 had made a 180 degree turn as it would have had to do so to land on Sakhalinsk Island after having already passed it (as it had been attacked in international waters just outside the 12 mile Soviet claimed territorial border west of Sakhalin), or, it could, on the other hand indicate the arcing eastern heading portion of KAL 007's spiral descent around 4.5 nm by 3.5 nm Moneron Island to a water landing east of Moneron and west of Sakhalin. (Moneron and Sakhalin islands are 24 nautical miles from each other and the lines of their respective 12 mile territorial borders intersect — see After Action Report map.) The statement "to a landing in Soviet territory on the island of Sakhalinska" under this view would describe a report by Japanese self-defense force, and possibly by its reporting radar station, which was inexact, but accurate, to indicate the general area in this sector. The Hokkaido tapes are not in the public domain.

There have been reports concerning Larry McDonald being alive that have come in to the Israeli Research Centre for Prisons, Psych-prisons, and Forced Labor Concentration Camps of the USSR, directed by Avraham Shifrin. These reports provided the following information:

McDonald had been brought by KGB to Sakhalin Island and then to Moscow. Upon arrival in Moscow, McDonald was taken to the Lubyanka KGB prison where he was given the designation, “Prisoner Number 3.” While at the Lubyanka, he was kept in isolation, taken from his cell only for questioning. He was interrogated several times by the head of the First Chief Directorate of the KGB, Vladimir Kryuchkov. Following a number of questionings, Mr. McDonald was moved to the Lefortovo KGB prison also in Moscow for continued interrogation over a period of several months. After a time in Lefortovo, Mr. McDonald was then moved to a “dacha” (summer house) in Sukhanova near Moscow where the interrogations continued. Mr. Shifrin's sources indicated that they had strong reason to believe that, while in Sukhanova, McDonald was interrogated under drugs that may have eventually resulted in identity loss. He was brought eventually to a prison in Karaganda, Kazakhstan,from which he was moved in mid-1987, by special transport, to a small prison near the town of Temir-Tau, also in Kazakhstan. The wardens of this prison identified him from a photograph that had been computer-aged to show what he would have looked like at the time. It also showed a scar that runs from his left nostril to the left end of his lips. Here he was given special treatment but was not allowed to communicate with anyone. In the summer of 1990, he was taken to the transportation prison in Karaganda. Here, as an unknown prisoner whose file is sealed by the KGB, he remained. As of 1995, all efforts to obtain additional information from the Karaganda prison have failed. Computer-aged picture of McDonald until 1995.

At right is a computer-aged photo of Larry McDonald, showing how he might have appeared in 1995. The small thumbnail images show an aging progression from the time of his disappearance. Prison wardens at Temirtau, Kasakhstan identified McDonald through this photo as their "probable prisoner". Note the scar from left nostril to mouth.

On December 5, 1991, Senator Jesse Helms, ranking member of the Minority Staff of the U.S. Senate Committee on Foreign Relations, wrote to Boris Yeltsin concerning U.S. servicemen who were POWs or MIAs. "The status of thousands and thousands of American servicemen who are held by Soviet and other Communist forces, and who were never repatriated after every major war this century, is of grave concern to the American people." Yeltsin would state on 15 June 1992, while being interviewed aboard his presidential jet on his way to the United States, "Our archives have shown that it is true — some of them were transferred to the territory of the U.S.S.R. and were kept in labor camps... We can only surmise that some of them may still be alive."

"One of the greatest tragedies of the Cold War was the shoot-down of the Korean Airlines Flight 007 by the Armed Forces of what was then the Soviet Union on 1 September 1983... The KAL-007 tragedy was one of the most tense incidences of the entire Cold War. However, now that relations between our two nations have improved substantially, I believe that it is time to resolve the mysteries surrounding this event. Clearing the air on this issue could help further to improve relations". Helms appended to this letter Interrogatories including the following:

"From Soviet reports of the incident, please provide

a) A list of the names of any living passengers and crew members from the airplane;

d) A list and explanation of what happened to the bodies of any dead passengers and crew;

And finally, Helms would add:

"1. How many KAL-007 family members and crew are being held in Soviet camps?

2. Please provide a detailed list of the camps containing live passengers and crew, together with a map showing their location."

For complete letter with interrogatories of Senator Helms to Yeltsin, see [3]

Senator Helms' letter to Yeltsin was prompted, according to the Chief of Staff under Helms for the Minority Staff of the Committee on Foreign Relations, Rear Admiral Bud Nance, by the CIA verified information coming from Israel concerning a water landing of KAL 007. See the Admiral Nance letter to the Director of the Israel Research Centre for Prisons, Psych-prisons, and Forced Labor Concentration Camps of the U.S.S.R.[6]

Since June 2012, there is a petition drive, supported by Senator Scott Brown, to be presented to President Obama and Speaker of the House John Boehner, to reopen the investigation into the shooting down of KAL 007 and reports of the survival of Congressman McDonald.[7]