In a major defeat for liberals nationwide, and Obama in particular, Brown won the U.S. Senate seat in 2010 by a 52%-47% margin, despite running as a Republican in an overwhelmingly Democratic state. This enabled Republicans to filibuster bills in the Senate, including blocking expansive versions of ObamaCare, and instead Brown voted three times to repeal it.[1]

Previously he represented the Massachusetts districts of Norfolk, Bristol and Middlesex in the State Senate. He claims to be a conservative and stresses his record of fighting wasteful government spending and higher taxes. However, he has voted for a Democratic jobs bill and avoided connection with the TEA Party movement since his election, leading many to suspect he is a RINO. Brown believes in a culture of family, patriotism and freedom.[2]

Later, in his bid for reelection, Brown was defeated in the heavily Democratic Massachusetts by liberal Democrat Elizabeth Warren in the 2012 election. Brown subsequently ran for the U.S. Senate in New Hampshire, and won the primary but lost the general election.

Brown is a Lieutenant Colonel in the Judge Advocate Generals (JAG) Corps and has served the Massachusetts National Guard since 1979. Brown is a graduate of Wakefield High School, Tufts University (1981), and Boston College Law School (1985). Brown is a nominal Protestant; he is married to Gail Brown and they have two children. In 1982, Brown posed for a "tame"[3] nude photo in Cosmopolitan magazine.

Brown's political life started as a Selectman for the Town of Wrentham. In 1998, he was elected a Representative to the Massachusetts House where he served until 2004. Brown won a special election for the State Senate in 2004. He was a committee member for Veterans' and Federal Affairs, Consumer Protection and Professional Licensure, Education, Election Laws, Higher Education, Public Safety and Homeland Security. He caucused for Children, Elder, Veterans',and Mental Health.[4]

Brown states on his campaign website that: "While this decision should ultimately be made by the woman in consultation with her doctor, I believe we need to reduce the number of abortions in America. I believe government has the responsibility to regulate in this area and I support parental consent and notification requirements and I oppose partial birth abortion. I also believe there are people of good will on both sides of the issue and we ought to work together to support and promote adoption as an alternative to abortion."[5]

Democrats had been favored to keep this Senate seat, and were in a state of shock when the Democratic candidate Martha Coakley lost her 30-point lead and fell behind Republican Scott Brown in the final week. Coakley, a party insider, proved to be an ineffective candidate who was unable to reach out to independents.

The race originally was expected to heavily favor Democrats, since there are a million more registered Democrats than Republicans. But independents are the largest bloc and they moved heavily to Brown.

Brown's main theme was that he would be the 41st senator and will block the Obama health care plan—which Massachusetts does not need, he explains, because it has its own plan now in operation. Coakley responded by attacking bankers and bringing in big guns like Bill Clinton, John Kerry and Barack Obama. Their appearance only underscored her base among Democratic party regulars; the independents rejected the old time politics by voting for Brown by 2-1. Brown had the momentum going into the final days of the campaign, and led Coakley by an 8-10 point margin in the final polls.

The defeat for Coakley, which came on the heels of the Democrats' loss of Virginia and New Jersey gubernatorial elections in Nov. 2009, was a major blow to the liberal cause and reinvigorated the Republican party nationally. A victory by Scott Brown showed that every Democrat seat, including Democratic-friendly districts, will not be secure or immune from replacement by their constituents.

In the end, Brown won chiefly because he won unaffiliated voters by a 73% to 25% margin. He picked up 23% of the vote from Democrats—in an election in which where 53% of the voters were Democrats, 21% were Republicans and 26% were not affiliated with either party. Coakley also barely carried a usually reliable Democratic constituency. Union workers went for her by just six points, 52% to 46%.[6]

Rasmussen polls show 56% of Massachusetts voters named health care as the most important issue. Coakley actually won among those voters by a 53% to 46% margin, as those Democrats who wants Obamacare to pass voted for her. One key to Brown's victory is that 41% Strongly Opposed the health care plan while just 25% Strongly Favored it.

Other issues dominated the election. 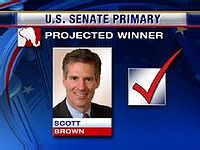 Senator Scott Brown has come out in support for a petition, presently garnishing petitioners, for the reopening of the investigation into the 1983 Soviet shoot down of Korean Airlines Flight 007 and reports of survivors including Democratic Congressman from Georgia Larry McDonald see [1]