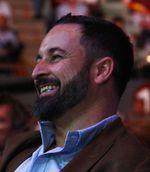 Santiago Abascal Conde (b. Bilbao, 14 April 1976) is a Spanish nationalist and conservative politician, leader of the political party Vox since 2014 and Deputy in the General Courts since 2019.

He is a strong supporter of nationalism, family and christian values, Spanish traditions and he is pro-life.