From Conservapedia
(Redirected from Mozart)
Jump to: navigation, search 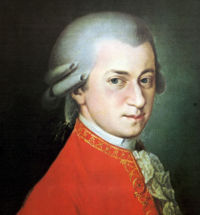 Wolfgang Amadeus Mozart (1756-1791) was a German/Austrian[1] composer during the Classical Period. Christened Johannes Chrysostomus Wolfgangus Theophilus, Mozart was born in Salzburg on January 27, 1756. Mozart was educated by his father, Leopold Mozart, a well-known violinist also remembered for his treatise on violin-playing.

During Mozart's short life he wrote more than forty symphonies, twenty-two operas, twenty-three string quartets, twenty-seven concertos for the piano and orchestra, and thirty-six sonatas for violin and piano. The catalogue of his works (known as the Köchel catalogue, abbreviated as K.) includes over 626 entries.[2]

Mozart was a Freemason.

To capitalize on Wolfgang's gifts, Leopold took the family on several tours throughout continental Europe and England between 1762 and 1773. This was also a boon for his education, as it put him at a tender age in contact with many great composers of various nationalities and musical traditions, and the young Wolfgang took it all in like a sponge. This would become important later, as he would successfully integrate the best of the Italian school, the Mannheim school, and the German and French musical traditions. In a sense, he would be one of the first to compose in an integrated trans-European style which has come to be known as "Classical."[3]

There are many stories concerning Mozart's life, but one of the most remarkable concerns a visit made to the Sistine Chapel, during which he heard a performance of Miserere by Gregorio Allegri. The fourteen-year-old Mozart first heard the piece during the Wednesday service. Later that day, he wrote it down entirely from memory, and returned to the Chapel that that week to make minor corrections. This was the first time that a manuscript of the work had been made public, and the Pope summoned Mozart to Rome and lifted the ban on the work's transcription.[4]

Mozart worked extremely hard on honing his craft. He spent hours in practice at the keyboard, and studying and copying out the music of others. He wrote in a letter to his father, "People make a great mistake who think that my art has come easily to me. Nobody has devoted so much time and thought to compositions as I. There is not a famous master whose music I have not studied over and over." [5]

Independence in Vienna, and Discovery of J.S. Bach

In 1781, the 25-year-old Mozart had outgrown the Salzburg court, and found himself frequently butting heads with his employer, the Archbishop Colloredo. Still at this age, Leopold wished to oversee his son's musical work in detail, which Wolfgang likely felt inhibited by. Emboldened by the recent success of his opera Idomeneo in Munich, Wolfgang struck out on his own and moved to Vienna, the musical capital of the German-speaking world.

Mozart's style typified the Classical era of music, although he increasingly incorporated contrapuntal arrangements into his work as he got older, after he had made the acquaintance of J.S. Bach's music. He worked mainly in forms that had previously been invented, but virtually invented the piano concerto. In addition to being a great composer, he was also a well known virtuoso on the piano (his favorite instrument).

Mozart married Constanze Weber in 1782 against the wishes of his father; she remained his wife and muse until his premature death nine years later.[6]

A movie loosely based on his life is Amadeus.

Of his many works, he wrote masterful masses for soloists, choir, and orchestra, over 40 symphonies, 17 piano sonatas, 27 piano concertos, and numerous examples of chamber music, including string quartets, piano quartets, piano trios, a piano quintet (with winds, not strings), and some of the most popular operas in history, including The Magic Flute, The Marriage of Figaro, and Don Giovanni, among many others.