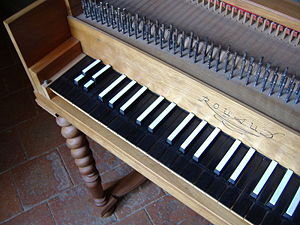 Keyboard of a harpsichord

The harpsichord represents the highest development of the plucked string family of keyboard instruments. Like the virginal and spinet it consists of a set of strings within a soundbox which are activated by a keyboard attached to a series of wooden “jacks”. When a key is depressed it raises the jack on which there is a leather plectrum, or “quill”, which hits the appropriate strings. There is a mechanism to stop the quill hitting the strings on the way back down.

The harpsichord is different to its smaller siblings in that there are two or more strings to each note and that the strings are stretched at right angles to the keyboard, instead of parallel (virginal) or at 45degrees (spinet). Like the spinet, it is shaped somewhat like the modern grand piano. Often there was more than one keyboard, and even three, and foot pedals were not unknown.

The instrument dates from the early 16th century – there is a harpsichord in London’s Victoria and Albert Museum that was built in Rome in 1521.

Some of the greatest keyboard music ever written – most of it heard these days on the piano - were first heard on the harpsichord. J. S. Bach, Handel,[1] the Frenchmen Couperin, and Rameau wrote widely for the instrument. The hundreds of sonatas by Domenico Scarlatti [2] have profound significance in the development of the sonata form. Since the early 1900's, a resurgence of interest in the harpsichord has taken place, and most large conservatories offer instruction in harpsichord performance. The instrument is still used in recitals of early music and in its place as a continuo instrument in baroque chamber pieces.[3]

The disadvantages of the harpsichord, and the reason it lost popularity to the clavichord and the newly developing piano, was its inability to lengthen a note or to vary the loudness with finger pressure, meaning there was a lack of tonal variety, and emotional complexity. Whilst both Haydn and Mozart played the harpsichord in their early days, they moved very quickly to the new forte piano. Also, it became out of tune very quickly and needed a constant supply of new “quills” to keep it going.

As a piece of trivia, it may be of interest that one Francis Hopkinson, whose signature appears on the Declaration of Independence, was a musician known for introducing new ways of tuning and quilling harpsichords. (He also wrote the first American secular song.)