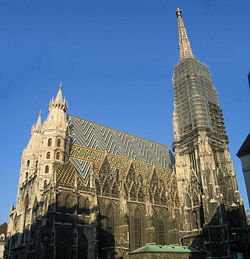 St. Stephens Cathedral under renovation in 2007.

Vienna (German: Wien, Hungarian: Bécs) is the capital city of Austria. With 1,800,000 inhabitants, it's by far the biggest city of Austria - Graz (population: 300,000) comes second. The Danube river flows through Vienna.

Amongst its most impressive landmarks is the imposing 12th century masterpiece of Gothic architecture, St. Stephen's Cathedral.

First settled by the Celts around 500 B.C., Vienna was an important settlement in the Roman Empire, which called it Vindobona. In 1529 the troops of the Ottoman Empire surrounded Vienna. The Habsburgs held their ground and the Ottomans retreated, to return again in 1683. This time, Vienna was successfully defended by Polish King Jan Sobieski III. By the 17th century - when the court was moved from Prague to Vienna - it was the seat of the Holy Roman Empire, ruled by the Habsburg dynasty, which continued to reign into the early years of the 20th century. In the "Anschluss" of 1938, Vienna capitulated under control of the Third Reich. After WWII, the city was governed by the Allied Commission for Austria for ten years. (Like Germany, Austria became divided into an American, British, French and Russian zone, and this division was mimicked by the administration of Vienna.) Since 1955, Vienna has been the capital of the Republic of Austria.

Vienna has one of the richest cultural histories of any city in Europe, with a particularly impressive musical tradition - the First Viennese School of composers consisted of Haydn, Mozart, Beethoven and Schubert, whilst later the waltzes and operettas of Johann Strauss Jr. came to epitomize the city's imperial grandeur and elegance. Johannes Brahms also made his home in Vienna, whose streets he claimed to know inside-and-out from his long walks around the city. Anton Bruckner, the composer of nine symphonies, taught harmony at the Vienna Academy for Music and Dramatic Arts; his admirer Gustav Mahler became conductor of the Vienna State Opera in 1897 and wrote his nine symphonies evoking Vienna's peculiar juxtaposition of the urban and the pastoral.

During the long reign of Kaiser Franz Joseph I, who occupied the throne from just after the revolution of 1848 to his death in 1916, Vienna enjoyed a golden age of culture. Franz Joseph was responsible, among other things, for taking down the city walls and commissioning numerous grand buildings on the "Ringstrasse," the name for the circular street which encompasses the city center. Among these numerous stunning examples of imperial architecture are the State Opera House, City Hall, the Musikverein (home of the Vienna Philharmonic), the symmetrical pair of museums known as the Museum of Historical Art and Natural History, the Parliament building, and the Votive Church (commissioned in neo-Gothic style as a thanks to God after a failed assassination attempt in 1853).

As the empire's power waned in the first two decades of the 20th century, new developments in art centered in Vienna showed undercurrents of unease and dread. In painting, the Expressionist works of Egon Schiele and Gustav Klimt seemed to foreshadow the city's decline. In music, the Second Viennese School comprising Arnold Schoenberg, Alban Berg, and Anton Webern stretched tonal dissolution and thematic complexity all the way past its breaking point, and after the First World War tried to put it back together again under new rules, in much the same way that Vienna was searching for her relevance after the fall of the empire.

Vienna is located east of the Austrian Alps, in the Vienna Basin, and immediately to the west of the city lie the Vienna Woods, which were immortalized in waltz form by Johann Strauss Jr. in Tales from the Vienna Woods. The Danube and Danube canal run northwest to southeast through the city.

The old city, which was walled until the second half of the 19th century, is in a circular shape, with St. Stephen's Cathedral marking the precise center of the circle. It is today known as the first of 23 municipal districts. Most of the main historical attractions are located either within first district, or just outside of it on the Ringstrasse. The whole district is bisected north to south by the famous shopping street Kärntnerstrasse which becomes Rotenturmstrasse after passing by St. Stephen's. Running perpendicular to this street is the Graben (or "Grave"), which contains a memorial to the Black Plague.

The other 22 districts also have long histories as suburbs or villages, and each accordingly has a distinct architectural flavor. For example, the third district, just east of the city center, is named "Landstrasse," or "Country Road," and accordingly contains many 18th and 19th century buildings which were country estates, including the house on Ungargasse where Beethoven finished his 9th symphony. As another example, the second district, Leopoldstadt, was a Jewish ghetto from the early 17th century through the second world war, and thus has a strikingly different style of architecture.

As with many European cities, the population of Vienna is growing rapidly as a result of immigration.[1] The city boasts one of Europe's most active cultural landscapes, with 70 museums and 44 theaters putting on a total of 3,777 performances a year.[2] Its citizens enjoy a very high quality of life, and was given the #1 ranking in Mercer's 2009 Quality of Life index.[3]