The title Messiah (Hebrew mashiach, 'anointed') literally applies to anyone anointed by God. It was used to refer to the kings of Israel as well as the High Priest. However, the references to The Messiah (The Anointed) talk of a single figure who will establish God's kingdom for all time. This term in Greek as The Christ in the Greek translation of the Old Testament that was in common use by the time of Jesus became the term used to describe Jesus himself, revealed as the Messiah in the New Testament. 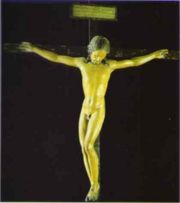 When God publicly chose a person to fulfill a role, He often symbolized that choice by anointing ( MaSHaH) him with oil. Kings and prophets - even foreign kings - were anointed. Thus, David refers to Saul as "the LORD's anointed," and God Himself calls even the Persian King Cyrus "My Anointed" (M'SHiiHi), as He had chosen him to bring the exiled people of God back home.

As time went on, it was understood that One would come to fulfill the will of God for His people. Sometimes, in the Hebrew and Aramaic Biblical and Post Biblical periods, the Messiah of God was identified by the prophets and the rabbis after them with a Servant who seemed to emerge more clearly from the pages of the Tanakh (Old Testament) as time went on, and sometimes with a "Son". Yet, there seem to be a parting of the ways as far as the roles of the Messiah as shown in the Scriptures. On one hand, it was clear that He was to be "Messiah son of David," of the line of Abraham, Isaac, Jacob, and King David, David's Heir on the throne, with absolute obedience from every tribe and people and language and nation. He would usher in the time of peace, righteousness, stability, and fruitfulness among the society of men and of nature itself, even changing the very norms of the natural - the lion and the lamb, the child and the viper, would live together without harm on God's holy mountain. On the other hand, both prophet and rabbi recognized, along with this King Messiah son of David, there was someone else, someone hidden, then revealed, bit by bit, only to be rejected, not only by the kings of the earth, but by His own people, but in some strange way, only dimly realized, His rejection was the very Will of God and the purpose of it was to bear sins and transgression for His own people, to sacrifice Himself to bring forgiveness and healing, to die. But even more dimly, they would see His life regained once again and because of that a benefit to the world to all that come to Him that would receive it and the way of God through Him. The rabbis called him "Messiah son of Joseph."

These "two Messiahs" remains two for orthodox Judaism, with by far, the emphasis on the Royal King Messiah, whereas in Christianity, they find their resolution in the Death and Resurrection of the One Messiah, Jesus of Nazareth. Commenting on the Son of Psalm 2, "The Rabbis have said that this means the Messiah, the Son of David, who is to come quickly in our time. The Holy One will say to him: ‘Ask of me, and I will give it to you,’ as it is said... ‘this day I have begotten you; ask of me, and I will make the nations your inheritance.’ And because he saw the Messiah, the Son of Joseph, who was killed… I will ask you for nothing more than life…" (Sukka 52a) Here in summary are some of the two lines of prophetic Scriptures, the one of Messiah ben David, and the other of Messiah ben Yosef.

I see Him, but not now; I behold Him, but not near; A Star shall come out of Jacob; a Scepter shall rise out of Israel... Out of Jacob One shall have dominion, and destroy the remains of the city. Numbers 24:17-19

The Aramaic Targums of this passage confirm that the "Star of Jacob" will be the Messiah:

I see him, but not now; I behold him, but he is not near; when a king shall arise out of Jacob and be anointed the Messiah out of Israel, He will slay the princes of Moab, and reign over all the children of men; (Num 24:17, Targum Onkelos)

..but when a mighty king of the house of Jacob shall reign, and shall be anointed Messiah, wielding the mighty scepter of Israel, He will slay the princes of Moab.... (Num 24:17, Targum Jonathan)

“Behold, the days are coming,” says the LORD, “That I will raise to David a Branch of righteousness; a King shall reign and prosper, and execute judgment and righteousness in the earth. In His days Judah will be saved, and Israel will dwell safely. now this is His name by which He will be called: THE LORD (YHWH) OUR RIGHTEOUSNESS.” Jeremiah 23:5-6

This prophecy speaks of a certain descendant of David who will be a "branch of righteousness" and king, will save Judah and Israel, and will be called "YHWH Our Righteousness" (יהוה צדקנו). The Talmud tells us that Rabbis Shmuel Ben Nahman (260 AD) and Abba Bar Kahana (300 AD) came to the conclusion that this divine name, "YHWH our Righteousness" is none other than "the name of the Messiah" (Baba Bathra 75b, cf. Santala, p. 64).

Rejoice greatly, O daughter of Zion! Shout, O daughter of Jerusalem! Behold, your King is coming to you; he is just and having salvation, lowly and riding on a donkey, a colt, the foal of a donkey. Zechariah 9:9

The Talmud and Midrash confirm that the king who will enter Jerusalem on a donkey is the Son of David and Savior: “The Son of David will come only in a generation which is either altogether righteous or altogether wicked… if they are righteous he will come in the clouds. If not, he will come humbly and riding on a donkey.” (Sanhedrin 97b) (cf. Santala, p. 55) “Just as there was a First Saviour so there will be a Last. Just as it is said of the First Saviour (Ex 4:20) that ‘He took his wife and sons and put them on a donkey’, so it is said of the Last Saviour that ‘He is lowly and riding on a donkey’ (Zech 9:9). (Midrash Qoheleth Rabbati 1) (cf. Santala, p. 59) Jesus indeed rode into Jerusalem on a donkey, as a sign of lowliness and subjection, yet also as the sign of his Messianic kingship:

Zech 12:10 ("they will look on me whom they have pierced") is interpreted by the Talmud as referring to “the Mashiach, Son of Joseph”:

Surely He has borne our griefs and carried our sorrows; Yet we esteemed Him stricken, smitten by God, and afflicted. But He was wounded for our transgressions, He was bruised for our iniquities; The chastisement for our peace was upon Him, and by His stripes we are healed. All we like sheep have gone astray; we have turned, every one, to his own way; And the LORD has laid on Him the iniquity of us all. He was oppressed and He was afflicted, yet He opened not His mouth; He was led as a lamb to the slaughter, and as a sheep before its shearers is silent, so He opened not His mouth... For He was cut off from the land of the living; for the transgressions of My people He was stricken. Isaiah 53:4-8

The Targum translates Isa 52:13: “Behold, my servant the Messiah will prosper.” Rashi, Radaq, Ibn Ezra, and the Talmud (Sukka 52b) say that it refers to the Messiah Son of Joseph.

The Midrash Tanhuma states that "this is the King, the Messiah, who will rise and be greatly exalted, higher than Abraham, greater than Moses, above the worshipping angels."

Midrash Ruth, commenting on Ruth 2:14, discusses the "Messianic meal": "The fifth interpretation of [Ruth 2:14] makes it refer to the Messiah. Come hither: approach to royal state. And eat of the bread refers to the bread of royalty; and dip thy morsel in the vinegar refers to his sufferings, as it is said, but he was wounded because of our transgressions (Isa 53:5). (Ruth Rabbah 5:6)

Rabbi Elia de Vidas writes: “Thus the Messiah suffered on account of our sins, and was wounded; He who does not wish the Messiah to be wounded for our transgressions may choose himself to suffer and carry his own sins.” (cf. Santala, p. 202)

The Talmud also associates the suffering servant with the Messiah: "What is the Messiah's name? ... the Rabbis said: His name is 'the leper scholar,' as it is written, surely he hath borne our griefs, and carried our sorrows: yet we did esteem him a leper, smitten of God, and afflicted (Isa 53:4). (Sanhedrin 98b)

The prayer (of Rabbi Eleazar Kalir 6th cent.) from the Mahzor Rabbah, prayed on Yom Kippur, the great day of atonement:

Then, before the creation, he already set up the Temple and the Messiah… the Messiah our righteousness has turned away from us, and can find no-one who can justify us. The yoke of our sins and our transgressions is a burden to us; and he was wounded for our transgressions, he suffered on his shoulders our iniquities; there is forgiveness for our sins. In his wounds we are healed; it is time to create forever a new creation… He is our God, our Father, our King, he is our Saviour and he will liberate and redeem us for a second time and let us hear of his grace a second time…” (Mahzor Rabbah for the Great Day of Atonement) (Santala, p. 207)