From Conservapedia
(Redirected from Renoir)
Jump to: navigation, search 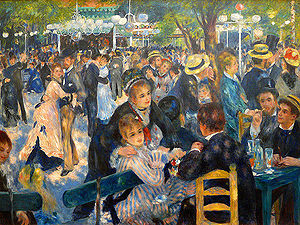 Pierre-Auguste Renoir lived from 1841 to 1919. He was born on February 25, 1841, at Limoges, France and died on December 3, 1919, at Cagnes sur Mer, France. His family moved to Paris in 1844. Renoir was a famous painter of Impressionism, perhaps the only artist who never produced a sad painting. He believed that art needs to be pretty, and eventually left Impressionism to paint classical nudes, landscapes and portraits with different styles.

From the age of thirteen he worked as an apprentice painter at Paris, painting on porcelain wares (plates, cups, and vases). In 1860, Renoir was admitted as an authorized copier in the Louvre. He made his first attempts at painting by studying the works of Rubens and Fragonard.[1] In 1862 Renoir began studying art under Charles Gleyre in Paris and there he met Claude Monet, Alfred Sisley and Jean-Frédéric Bazille. Masters, particularly those of the 18th century, like Antoine Watteau, François Boucher and Jean-Honoré Fragonard, influenced his own painting throughout his career. He studied the art of this masters visiting the Louvre. Finding a new inspiration in nature, he, as other impressionist artists, displayed vibrant light and color instead of the somber blacks that had dominated previous painting. Gustave Courbet and Camille Corot had also an important influence in his work. In 1881, he traveled to Algeria, Spain and Italy; he met Titian's masterpieces in Florence and the paintings of Raphael in Rome, and Venice conquered him in a way that he will evoke in several canvases. His nude artworks allude simultaneously to the snudes of Rubens and Jean-Honoré Fragonard. Renoir started a nude in 1850, "Reclining Nude", and painted the last one in 1919, "The Bathers". Renoir was a prolific painter with more than 4,000 paintings. Some art historians consider the following periods in Renoir's artworks: "The beginnings" 1858-1869 (e.g. "Crown of Roses", ca. 1858... his initial paintings show the influence of the colorism of Eugène Delacroix... exhibitions at the Salon de Paris, and the Salon des Refusés... Renoir once said "my hero was Díaz" for Narcisse Diaz de la Peña, a member of the Barbizon School... In the forest of Fontainebleau, in 1863, Renoir met the Bordeaux painter Narcisse Diaz who advised him to lighten his palette... [2] In 1863 he met Paul Cézanne and Camille Pissarro introduced by Bazille. Cézanne and Pissarro had first met two years previously, at the Atelier Suisse); "Impressionism" 1869-1878 (In 1869, Renoir painted alongside Monet at La Grenouillère... their sketch like technique of broad, loose brushstrokes and their brightened palette attempted to capture the effects of the sun streaming through the trees on the rippling water. This painting campaign catalyzed the development of the Impressionist aesthetic... [3] In the forest of Fontainebleau, Renoir, Monet, Bazille and Sisley painted together and experimented in light, color, water, and form); "dry" or "Ingres period" (he called his maniere aigre) from 1881 to 1888 (a more decorative and traditional style... where drawing took precedence over colour and his painting shows a sharper definition of form [4])... e.g. " Les Parapluies" ("The Umbrellas") (ca. 1879), "Le Déjeuner des Canotiers" ("The Luncheon of the Boating Party") (1880-1881), "Les Grandes Baigneuses" (1884-1887); "the pearly period" after 1890 until 1897, (Renoirs work moved in a new direction yet again... he returned to using thin brush strokes and became less concerned with outlines... epic nudes and domestic scenes); "late career" early twentieth century (style changed again and he opted for stronger colors - often reds and oranges - and thick brush strokes... the female nude was a favorite subject of Renoirs and he depicted details of the scene through freely-brushed spots of color which fused his figures and their surroundings... [5]. The Rubenesque nudes he had been painting reached a level of unprecedented exaggeration in the twentieth century, culminating in the massive Bathers at the Musée d'Orsay "The Bathers"). [6]

Before his death Renoir had a supreme triumph, he saw his portrait "Madame Georges Charpentier" (1877), hanging in the Louvre.

No one, throughout the history of painting, represented the richness and sensuous beauty of the female form more successfully. Henry S. Francis. [10]

Renoir's work seems always to be about pleasurable occasions, and reveals no great seriousness in his subjects. He apparently shocked his teacher Gleyre by saying, 'if painting were not a pleasure to me I should certainly not do it'. The National Gallery, Trafalgar Square, London. A short while before he died in Cagnes-sur-Mer in 1919, he said the following to his nurse about painting: “I think I am beginning to understand something about it”. [11] Monet painting in his garden in Argenteuil, 1873.