The Metropolitan Museum of Art (sometimes abbreviated as "the Met," though this is also often used for The Metropolitan Opera), located on the edge of Central Park in the Upper East Side of New York City, New York, is one of the largest and most extensive art museums in the United States and even the world, with more than 2 million works of art in its permanent collection[1] and more than 2 million square feet of floorspace[2]

The Metropolitan Museum of Art first opened its doors on February 20, 1872, housed in a building located at 681 Fifth Avenue in New York City. John Taylor Johnston, a railroad executive whose personal art collection seeded the museum, served as its first President, and the publisher George Palmer Putnam came on board as its founding Superintendent.[3] The first work ever to be acquired by the museum is a marble Roman sarcophagus listed as "Asiatic garland sarcophagus";[4] it is given the categorization number "70.1" because it was acquired in the year 1870 (the same year that the museum itself was established by an act of the New York State Legislature) and because it was the first piece of art acquired.[5] 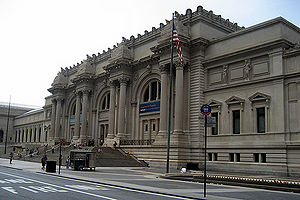 The art is organized into twenty-two "curatorial departments."[6] Notable works of art on display at the museum include a print of Katsushika Hokusai's The Great Wave off Kanagawa, a print of Albrecht Dürer's Melencolia, five paintings by Johannes Vermeer (the largest collection anywhere in the world), thirty-seven paintings by Monet, twenty-one oil paintings by Cézanne, eighteen paintings by Rembrandt, El Greco's A View of Toledo, Jacques-Louis David's The Death of Socrates, and Duccio di Buoninsegna's Madonna and Child, among many, many more. Relatively unique to the museum is an extensive collection of about five thousand musical instruments from all over the world and throughout history.

The museum also operates a satellite institution known as "The Cloisters"[7] to house many works from its Medieval art collection. The Cloisters are located in Fort Tyron Park on the northern tip of Manhattan Island, just a few miles away from the main building.