Edgar Degas (1834-1917), French painter. In 1854-1859 he traveled to Italy studying the Old Masters; by 1860 Degas had drawn over 700 copies of other works, mainly early Italian Renaissance and French classical art.[1] Degas was a great painter of Impressionism, yet differed from most other Impressionists because he detested painting outside. "Art is not a sport" he once said.[2] He loved to paint ballerinas and horse racing. He is also known for his "slice of life" paintings of working-class people. Some of his most well known paintings are "The Glass of Absinthe" and "Prima Ballerina". 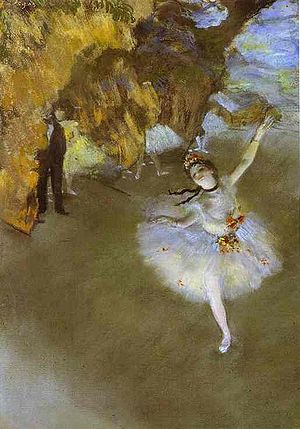 Spartan Girls Challenging Boys, ca. 1860-62, one of the most important historical work of his early period.

In 1862, Degas meets Edouard Manet in the Louvre while copying Diego Velázquez's painting The Infanta Margarita; later at the Café Guerbois located at 11 grade rue des Batignolles (today 9 avenue de Clichy), he gathers with other avant-garde artists such as Edouard Manet, Paul Cézanne, Henri Fantin-Latour, Pierre-Auguste Renoir, Claude Monet, Alfred Sisley, Jean-Frédéric Bazille, and Camille Pissarro. [1] He and his contemporaries, known as the Impressionists, organized independent exhibitions in which they showed their controversial work. Degas participated in all the group exhibitions except that of 1882.

Degas amassed a collection of art so vast and of such substance that he considered establishing his own private museum to house it. [2] Count Lepic and His Daughters; Theft from E.G. Bührle Collection.