From Conservapedia
(Redirected from Paul Cezanne)
Jump to: navigation, search 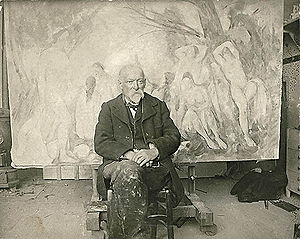 Cézanne was an artist whose works broke natural forms down into geometric shapes. He produced many versions of canvases depicting Mount Sainte-Victoire, smokers, card-players and bathers, and painted still lifes and portraits. Cézanne attempted to bridge nature and art. In the latter part of his career, he used colors in short strokes or in almost mosaic patches, all of equal intensity. He is often seen as anticipating cubist and abstract art, because he reduced the imperfect forms of nature to these essential shapes. [1] From 1882, Cézanne executed a substantial number of landscape pictures of his native Aix and of L'Estaque, a small fishing village near Marseille, in which he continues to concentrate on pictorial problems of creating depth. Here Cézanne used an organized system of layers to construct a series of horizontal planes, which build dimension and draw the viewer into the landscape... In Gardanne (a hill town near Aix-en-Provence where Cézanne worked from the summer of 1885 through the spring of 1886) he painted the landscape with intense volumetric patterns of geometric rhythms most pronounced in the houses. This picture anticipates the Cubism of Georges Braque and Pablo Picasso. [2]

Cezanne is one of the most liberal artists I have ever seen. He prefaces every remark with Pour moi it is so and so, but he grants that everyone may be as honest and as true to nature from their convictions; he doesn't believe that everyone should see alike. Mary Cassatt

Cézanne is one of the most famous French artists. "Rideau, Cruchon et Compotier" is considered the most expensive still life ever sold at an auction; it was sold at Sotheby's, New York on May 10, 1999, for US$60.5 million.