Georges Braque (Argenteuil 1882 – 1963) was a French painter and sculptor. From 1902 to 1904 Braque studied painting at the Académie Humbert in Paris. Along with Pablo Picasso (they were practically inseparable from c. 1908 until 1914), he created cubism .

Around 1912, to avoid losing contact with the visible world which Cubism had veered towards, Braque began to paint some areas in trompe l'oeil, imitating marble or wood, drawing on the skills of the painter-decorator which he had learned from his father. Later, he went further in sticking labels onto his compositions, as well as pieces of wallpaper or cuttings from real newspapers. These papier collés became another of the revolutionary innovations introduced into modern art by Braque and Picasso. [1]

In World War I, Braque was badly wounded. He, as well as Pablo Picasso, Henri Matisse and Juan Gris, were friends of Gertrude Stein. 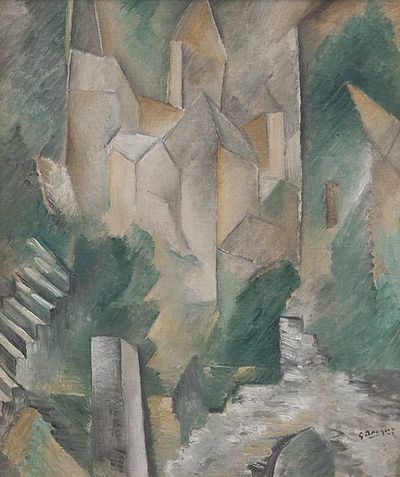 The Church of Carrieres-Saint-Denis, 1909, Tate.