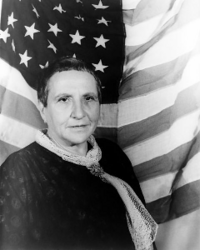 Gertrude Stein (February 3, 1874 – July 27, 1946) was an American writer (born in Allegheny, Pennsylvania) and one of the leaders of the literary modernism movement. Some of her most famous works include The Autobiography of Alice B. Toklas, The Making of Americans, and Three Lives. Noted for being highly innovative in her approach to language and writing, she was enormously influential on several authors such as Ernest Hemingway and F. Scott Fitzgerald, as well as artist Pablo Picasso. She was the center and the most dominant personality in the Lost Generation circle of American ex-patriates in Paris in the 1920s.

The Autobiography of Alice B. Toklas

Stein's autobiography, her first and most successful effort after a long series of failures, was recounted from the perspective of her lover, Alice B. Toklas. This quirky approach, which broke the only real rule of writing an autobiography, was initially engaged upon for the money alone. The fame and success it brought Stein enabled her to bring to light her previous works, which had been mostly ignored by the public at large despite their disproportionate influence.