Ernest Hemingway (1899-1961) was a famous American author, born in Oak Park, Illinois, who spent his youthful summer months in a lakeshore home in Michigan. His novel For Whom the Bell Tolls established his reputation, while The Old Man and the Sea is considered his masterpiece. His writing was refreshingly masculine in style, but humorless. A list of his works include:[1] 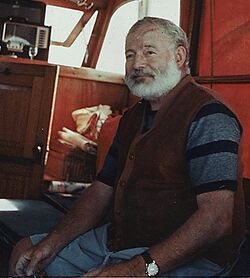 He grew up in a Congregationalist home, but became an atheist in his late teenage years. He hid this fact from his parents and later married into the Roman Catholic faith as requested by his second wife (Pauline), although his conversion was probably not sincere. He was critical of his father, saying that “My father was a deeply sentimental man. And like all sentimental men, he was also very cruel.”[2] Ernest Hemingway was also a compulsive liar, and had a soft-spot for Communists, even turning a blind eye to the Spanish Stalinists' massacres in Spain.

He introduced the Pamplona bull run to an international audience[3] and was also a fan of bullfighting.

He won the Nobel Prize for literature in 1954.[4] In 1961 he committed suicide, but was allowed a Roman Catholic burial, as it was ruled he was not fully responsible for his actions due to a mental decline in the last months of his life.[5][6]

Hemingway influenced American literature profoundly,[7] steering it towards literary minimalism with reduced use of adverbs, greater symbolism, and conciseness.[8] He helped popularize a style of writing that featured plain language, short sentences, and clean, sparse prose. His writing frequently focused on American expatriates living in Europe or Africa. Leading characters are often very masculine, somewhat alcoholic, and suffering from mental scars, but always in control of themselves. These characters are believed to be based on Hemingway himself. Some interpret -- perhaps incorrectly -- the flaws in Hemingway's masculine characters as a criticism of masculinity itself. He admired the manliness of actor Gary Cooper, the star of High Noon.

In 2011, 50 years after his death, it was revealed that Hemingway had been the subject of an FBI investigation, spurred by J. Edgar Hoover's suspicions about Hemingway's activities in Cuba.[9]

Hemingway's home in Key West, Florida is a major tourist attraction in the city, well known for his litter of polydactyl (six-toed) cats, some of which are descendants of Hemingway's own cats (the term "Hemingway cat" is commonly used to describe all polydactyl cats due to the author's popularity).

Hemingway committed suicide at his last home in Ketchum in Blaine County, Idaho. Like the actress Ann Sothern, who also spent her last years in Ketchum, Hemingway is interred at Ketchum Cemetery.

Although Hemingway ultimately moved out of Cuba and died in Idaho in 1961, he was put on a Cuban postage stamp by Fidel Castro in 1964. His surviving wife Mary then denied that Hemingway supported Castro's revolution, and observed that they met only once and chatted only about fishing.[10] A commentator viewed this a bit differently, however:

Hemingway attempted to become a spy for the communist KGB in the 1940s by meeting with Soviet agents in Havana and London, according to Spies: The Rise and Fall of the KGB in America (Yale University Press). The British Guardian reported that the book "reveals the Nobel prize-winning novelist was for a while on the KGB's list of its agents in America."[12]

Although ostensibly a convert to Catholicism, Hemingway was never public about his real religious beliefs.

The lack of humor in his writings suggests that he may have been an atheist, though not a militant one. "All thinking men are atheists," Hemingway asserted in his posthumously published memoirs, A Moveable Feast (1964).[13] But it is a bit unfair to rely on a posthumous publication as a testament of one's beliefs.

Biographer Paul Johnson wrote that "[Hemingway] did not only not believe in God but regarded organized religion as a menace to human happiness ... [he] seems to have been devoid of the religious spirit… [and] ceased to practice religion at the earliest possible moment."[13] Still, that observation is not conclusive about what Hemingway believed at the end of his life, when he committed suicide.

From The Old Man and the Sea (1952), Hemingway had multiple masculine observations: