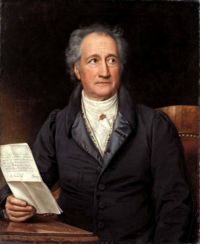 In Literature, Goethe is one of the greatest figures.

Goethe produced volumes of poetry, essays, criticism, and scientific work, including a theory of optics and early work on evolution and linguistics. He was fascinated by minerals and early mineralogy (the mineral goethite is named for him). As a philosopher and writer he is one of the key figures in the transition from the Enlightenment to Romanticism.[1]

Goethe's possible importance to 19th, 20th century and modern-day science has been an ongoing academic concern. Perhaps Faust was Goethe's way of warning mankind against the use of his scientific methods. Such books are Rudolf Steiner's Goethe the Scientist (1950) and A Theory of Knowledge Implicit in Goeth's World Conception (1968), Frederick Amrine's Goeth and the Sciences: A Reappraisal (1987 Boston Studies in the Philosophy of Science, 97), Henri Bortoft's Goethe's Scientific Consciousness (1986), and Douglas Miller's Goethe: Scientific Studies (1988).[2] Also David Seamon's Goethe's Way of Science (SUNY Press, 1998)[3] and Dennis L. Sepper's Goethe Contra Newton: Polemics and the Project for a New Science of Color (Cambridge University Press, 2003) [4]

Goethe in the Campagna by Johann Heinrich Wilhelm Tischbein.

Among many other great works: