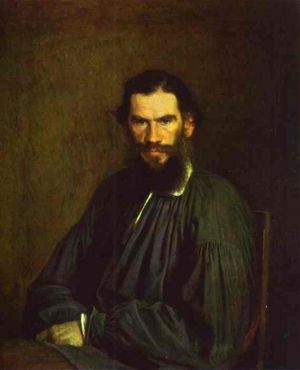 In 1862 he married Sonya Andreyevna Behrs who bore him 13 children. In 1901 the Russian Orthodox Church excommunicated him. After leaving as a wandering ascetic, Tolstoy died of pneumonia on November 20 in 1910.

Some of his works:

After finishing Anna Karenina Tolstoy renounced all his earlier works. "I wrote everything into Anna Karenina," he later confessed, "and nothing was left over." Voskresenia (1899, Resurrection) was Tolstoy's last major novel. [1]

The Kingdom of God is within you

Tolstoy's great philosophical/religious tract, The Kingdom of God is within you, summarised the development of his thought and reflections on Christianity. At its heart is the explanation of Tolstoy's belief that to truly call one's self a Christian one must abide simply by the teachings of Christ, as expressed in the New Testament. For Tolstoy, this meant, above all, pacifism, as expressed by Christ in the Sermon on the Mount. Tolstoy viewed any person or authority that violated this precept as having rejected Christ's teachings and, thus, as not being Christian. Tolstoy himself did not accept attempts by non-contemporary followers of Christ to re-interpret and de-contextualise the message of the gospels to permit certain forms of violence. This led him into direct conflict with the Orthodox Church and the Russian authorities. As such, The Kingdom of God is within you was banned in his home country, and was first published in Germany.

Tolstoy's philosophy has had a major impact on Christian pacifist movements, such as the Quakers, and on those committed to non violence.

During the Crimean War Tolstoy commanded a battery, witnessing the siege of Sebastopol.