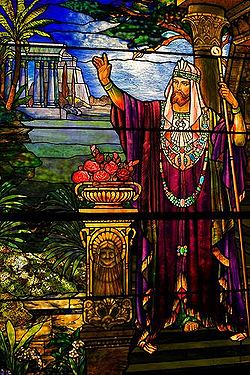 Solomon (Hebrew: שְׁלמה, Shlomo, "peace") (c.970 BC - c.930 BC) was the third King of Israel between c. 970 BC and c. 930 BC. Son of Bathsheba, he succeeded after his father King David. Solomon wrote most of the Proverbs and the books of Ecclesiastes and Song of Solomon are also attributed to him. Solomon was famed for his wisdom, as well as immense and wealth and power. It says in the Bible that during the reign of Solomon, Israel was at its strongest. 'For he ruled all the kingdoms west of the River, from Tipshsah to Gaza and had peace on all sides' (I Kings 4:24).

When Solomon's father King David was old and bed ridden, Solomon's brother Adonijah tried to set himself up as king. With David's help proclaiming Solomon as his successor, this failed. David then had his son close up his affairs for him, enacting justice on Joab and Shimei.

God came to Solomon in a dream where Solomon asked him for wisdom. God was very pleased at his request - instead of asking for wealth, or a long life, or the death of his enemies or things only for himself, he wished to rule wisely. Because of that, God made him more wise than any person who had ever lived.

David could not build God's temple because he was a man of 'blood', but Solomon could and did in 960 B.C., making a monumental structure that lasted until the Babylonian captivity ended the line of Davidic kings in 586 B.C.

Solomon had about 700 wives and 300 concubines,[2] many for political ties of the day. Over time, Solomon's wives turned him away from God.[3]