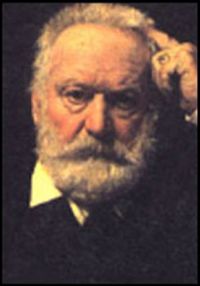 Victor Marie Hugo (1802–1885) is considered one of the greatest Romanticist poets, for which he is best known in his native France. A prolific writer who could complete 20 pages a day, he also endured years (such as in the 1840s) when he was unable to produce. He penned the classic play Cromwell (1827), and novels The Hunchback of Notre Dame (1831) and Les Miserables (1862). Hugo addressed many of the social problems of his time, such as poverty, child labor, and women's condition. He strongly opposed the death penalty. While he was not blind to their flaws, he admired both the French Revolution and Napoleon. His writing style was for the common man.

Christianity animated his work. In his Preface to Cromwell, Hugo wrote:

Lastly, this threefold poetry flows from three great sources - The Bible, Homer, Shakespeare ... The Bible before the Iliad, the Iliad before Shakespeare.

God is behind everything, but everything hides God.

Architecture has recorded the great ideas of the human race. Not only every religious symbol, but every human thought has its page in that vast book.

Victor Hugo was born in Besançon, France on February 26, 1802, to Sophie Trébuche (mother), and Joseph-Léopold-Sigisbert Hugo (father). His father traveled in Napoleon's army as a general when Hugo was a child, which forced the family to move a lot. Weary of this, Sophie separated from Joseph and settled in Paris.

Between 1815 and 1818 he studied law, though he never did anything with it. Encouraged by his mother, he instead pursued a career in literature. He founded Conservateur Litteraire where he published his own poems and stories in.

By 1830, he and his wife had four children. Tired of her husband's sexual demands and her pregnancies, Adèle began to sleep alone, and eventually had an affair with critic Charles-Augustin Sainte-Beuve. In 1833, Hugo met the actress Juliette Drouet, who would remain his primary mistress until she died.

In 1841, he was elected to the French Academy and nominated for the Chamber of Peers.

Following the drowning of his daughter Léopoldine (aged 19), her unborn child husband in 1843 which arose from a boat accident in the Seine, he stepped back from publishing his works.

In 1848, he was elected to the Constitutional Assembly following the February Revolution of that year.

Following Louis-Napoleon Bonaparte's coup in 1851, he fled to Brussels. He didn't return to France until 1970 when Napoleon the Third fell, declining three amnesties, and living on the Channel Islands for 19 years. While living on the island with his mistress, Hugo wrote his longest and more socialist novel, Les Miserables. When he returned to Paris, he was hailed as a hero of the republic.

In 1878, he was stricken with cerebral congestion. He and his mistress Juliette lived in Paris for the rest of their lives. On his 80th birthday in 1882, the street which he lived on was renamed Avenue Victor Hugo in his honor. Juliette died the next year. Hugo himself died on May 22, 1885. He is buried in the Arc de Triomphe to the Panthéon, and his funeral was attended by two million people.

From "The Hunchback of Notre Dame of Paris"

Here unfold themselves to the eye, successively and at one glance, the three deep Gothic doorways; the richly traced and sculptured band of twenty-eight royal niches; the immense central rose-window, flanked by its two lateral windows, like a priest by the deacon and subdeacon; the lofty and fragile gallery of trifoliated arches supporting a heavy platform on its slender columns; finally, the two dark and massive towers with their projecting slate roofs--harmonious parts of one magnificent whole, rising one above another in five gigantic storeys, massed yet unconfused, their innumerable details of statuary, sculpture, and carving boldly allied to the impassive grandeur of the whole.