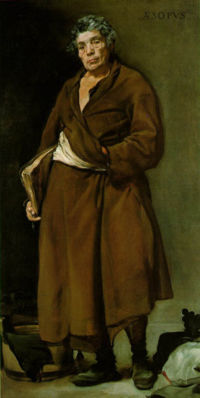 Aesop was a Phrygian or Lydian slave in 6th century B.C. Greece. He is counted as the author of self-titled Aesop's Fables- a collection of short stories each containing a simple moral message.

Very little is known about Aesop, many of whose fables - tiny stories featuring animals and even inanimate objects like trees and flowers, each designed to tell or advise about life - are universally known.

From the earliest days of writing - and perhaps earlier - the Greeks enjoyed explaining and interpreting the interplay of normal life in the words of animals speaking with the tongues of men. These original little homilies were in verse. Those attributed to Aesop were in prose.

There are over 350 Aesop's Fables in existence (many, however, are very short – about ten lines or less – and we cannot be absolutely certain he was the creator of all of them). He was greatly admired throughout ancient Greece – Athens erected a statue of him, he appeared in several of Aristophanes’ comedies and Socrates is said by Plato to have put some of his fables into verse whilst awaiting death.

Many of the morals have become familiar to the point of being clichés. A brief perusal uncovered:

Every man for himself.
To be prepared for war is the best guarantee of peace.
Happy is the man who learns from the misfortunes of others.
Necessity is the mother of invention.
Self-help is the best help.
Birds of a feather flock together.

There's a famous tale of the wolf who devoured the lamb. Despite the lamb's refutation of all the wolf's accusations against him. The moral of the story shows "The tyrant will always find pretext for his tyranny."

The true Fable, if it rise to its high requirements, ever aims at one great end and purpose representation of human motive, and the improvement of human conduct, and yet it so conceals its design under the disguise of fictitious characters, by clothing with speech the animals of the field, the birds of the air, the trees of the wood, or the beasts of the forest, that the reader shall receive advice without perceiving the presence of the adviser. [1]