Sculpture is a form of art. It also means a three-dimensional work of plastic art. Sculpture as an art form goes back to Prehistoric times. A sculptor is one who creates sculptures.

Sculpture, painting, architecture, music, literature, poetry, drama, dance, and cinema are some of the forms of Fine Arts. Sculptures are made of stone, marble, wood, glass, bronze, iron, clay, or any other hard or plastic material that could be transformed into a three-dimensional object. The shaping figures could be in the round or in relief. For this reason Sculpture is considered also one of the plastic arts.

The Greeks were blessed with a large supply of marble, which was what they used most in their sculptures. Bronze was also used in their artistic work of humans.[1]

The main types of sculpture are bust, miniature figure and statue.

Sculptures are also categorized by the process into four categories:

The sense of motion in painting and sculpture has long been considered as one of the primary elements of the composition. Alexander Calder.

Sculpture masterpieces are all over the world; many different techniques have been used in the many different regions (China, India, Egypt, Greece, Rome, Italy, etc.). Sculpture in the ancient Americas developed in Mexico and Peru. The Venus of Willendorf (Austria) is one of the earliest known sculptures ever made (Upper Paleolithic). 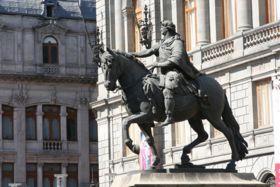 The Classical period of Ancient Greece produced some of the most exquisite sculptures the world has ever seen... human anatomy was deemed worthy of being immortalized in stone or bronze... and proportion became the main preoccupation of sculptors and architects. [2]

Artists of this period of Greece are little known and most of their works were destroyed; fortunately the Romans made copies of the original works, (e.g. Discus Thrower). Praxiteles is considered one of the best artists of this period; his statue of Hermes, discovered at Olympia in 1877, has become famous throughout the world. Myron, Phidias, Polyclitus, Scopas, and Lysippus were also famous Greek sculptors.

The scale and ambition of classical Greek sculpture can be seen in a fragment of an early masterpiece. The famous Charioteer of Delphi (bronze statue also known as Heniokhos, sculptor unknown, commissioned by Polyzalus.), a life-size bronze, is the only surviving figure of a major group consisting of the chariot and its horses, a royal passenger on board with the charioteer, and an attendant slave boy. [3]

Romans also developed a sense of style aimed for a more realistic view. It is also very interesting to note that while Roman statues survive in great numbers, few names of Roman sculptors were recorded. [4]

The Florentine Donatello was an influential sculptor of the early Renaissance. In about 1415 he delivered the first free-standing Renaissance sculpture, The Statue of St. Mark. His most famous statue is the David (bronze, 1430). In 1453, his Equestrian Condottiero Erasmo da Narni was set up in Padua. Andrea del Verrocchio was one of the leading artists of late 15th century in Florence.

Michaelangelo is one of the most famous sculptors artists... a perfectionist in his art. The marble statues The David, The Pieta and The Moses are his famous masterpieces. The Pieta in Saint Peter's Basilica is the only work signed with his name. Michelangelo always thought of himself first and foremost as a sculptor. Other projects were undertaken reluctantly. On the contract for the painting of the Sistine Chapel ceiling, for example, he pointedly signed Michelangelo sculptore - "Michelangelo the sculptor". [5]

Leonardo da Vinci worked as a sculptor from his youth on. He started a bronze horse at Milan, Italy that could not be finished by war. It was going to be the largest equine statue ever built. The full-scale model of the horse in clay was unveiled in November 1493. Sculptures and studies to sculptures by LEONARDO da Vinci

The most important sculptor of the Baroque period was the Italian Gian Lorenzo Bernini (Napoli, 1598 - Roma, 1680). Some of his famous works are The Rape of Proserpina, Apollo e Dafne, Angelo Reggicartiglio, La Beata Ludovica Albertoni and Fontana del Tritone. Alonso Cano (Granada, 1601 - Granada, 1667) is one of the great Baroque sculptors of Spain. Antonio Canova (1757 - 1822), an Italian Neoclassical sculptor made the famous reclining Venus Victrix of Pauline Borghese Bonaparte and the Bust of Napoleon. He sculpted also among others his well-known Three Graces from 1812 to 1816.

Auguste-René Rodin (1840 - 1917) is considered one of the greatest and most prolific sculptors of the 19th and 20th centuries; several of his most famous sculptures, such as The Thinker, The Kiss and The Three Shades, were derived from smaller reliefs contained within The Gates of Hell... He modeled portrait busts and large scale versions of well known people, such as the Monument to Victor Hugo.[6] Antônio Francisco Lisboa (1730 or 1738 – 1814) is one of the most famous sculptors from Brazil. The Spanish painters, Pablo Picasso, Joan Miró and Salvador Dali were also sculptors. Francisco Zuñiga (born in Costa Rica, 1912 - 1998) was a Mexican sculptor; he began studying the collections of the Museum of Archaeology in Mexico City and the indigenous culture of the Southeastern Mexican people. In the sculpture of the Aztec and Maya, he found "the myth of life and death in aggressive, rounded figures with a heaviness, vitality, and formal equilibrium." In 1947, he became a citizen of Mexico and a state teacher.[7] Enrique Carbajal "Sebastián" (b. 1947), is a contemporary Mexican artist with some 150 monumental pieces in cities around the world.

Sir Alfred Gilbert (1854 - 1934) was an English sculptor, member of the New Sculpture movement (Britain - nineteenth century). In 1887, he was elected ARA (Associate Member of the Royal Academy). Gilbert is considered one of the mos important sculptors of the Victorian era. Gilbert's most well-known work is the Statue of Eros (Anteros), 1893 in Piccadilly Circus, London. The Shaftesbury Memorial Fountain, depicting Anteros (Greek mythology (Ἀντέρως, Antérōs) was the god of the requited love) as "the Angel of Christian Charity", but actually referred to as the Statue of Eros (Anteros's brother), is one of the first statues in the world to be cast in aluminium.

The American sculptor Paul Manship (1885 – 1966) discovered archaic Greek sculpture while studying in Rome; he is considered a precursor to Art Deco; Dancer with Gazelles, (1916) and The Prometheus Fountain, at the Rockefeller Center, New York, (1934), are two of his most renown works. Alexander Calder (1898 – 1976) was an American sculptor known by his wire figures, notably for a miniature circus (1926–31). George Segal (New York, 1924 - New Brunswick, 2000), was an American painter and sculptor of Jewish ancestry. He was recognized with 20 awards included the 1999 National Medal of Honor. Segal was associated with the Pop Art movement. The Great Buddha of Kamakura. Victory (Nike) of Samothrace, displayed in the Louvre (Hellenistic period).