From Conservapedia
(Redirected from Roman)
Jump to: navigation, search

The Roman Empire at the death of Trajan in 117 A.D.[1] The pink shaded areas denote vassals.

The Roman Empire marks the period when government control in Rome went from a Republican form of government to rule by an emperor. The appointment of Augustus Caesar as ruler in 27 BC has been used as the starting date for the Roman Empire, although, alternately, the appointment of Julius Caesar as perpetual dictator in 46 BC is sometimes considered as a short-lived precursor. The Roman Empire was the direct successor to the Roman Republic which had already established Rome as the dominant force in the west. Because of this succession, there is no definitive date when the Roman Republic became the Roman Empire. Indeed, in the early years of Augustus' reign, it was unclear that a permanent change had taken place, although this was apparent by the end of his long reign. Utilizing the rule of law and a strong military, the Roman Empire ruled most of the western civilized world. While the general goal of the Empire as put forth by Augustus became keeping the status quo instead of adding new territory, there were still some changes and continuing growth. Britain was added in 43 AD as well as other small conquests until the empire reached its height in about 117 AD.

Rome may be credited with creating the virtue of civic republicanism: that a citizen should give his life in battle or in work to the glory of the Republic.

One of its greatest rulers was also its first: Caius Iulius Caesar Octavianus, or Augustus ruling from 27 BC to 14 AD. He set the stage for a long progression of rulers that lasted 500 years and established a peace, the Pax Romana that lasted almost 200 years (although there were many wars and revolts during that time period, all out wars were avoided). The high point of the Empire is generally considered to be under the Five Good Emperors from 96 to 180 AD. The low point was under the Age of Thirty Tyrants from 259 to 268 where a revolving door of 19 different generals claimed the throne.

Messianic expectations at the time of Jesus were known even in Rome. For example, the prophecy that "out of Judea at this time would come rulers of the world" was popular in the Roman Empire, so popular that the biographer Suetonius saw fit to include it in his De Vitae Caesarium. However, Suetonius identified the ruler as Vespasian in his "Life of Vespasian," since Vespasian did, as it was said, "save the State" during the year of the four emperors. 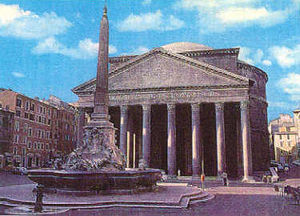 The pre-imperial history of Rome is treated elsewhere. In brief, the Republic served to make Rome the most powerful military force in the west and led to great conquest, but it gave way to rule by Augustus and the Emperors and would never again be seen for Rome's remaining 500 years.

Augustus was the first Emperor, leading a stable and peaceful Empire. He cut the size of the military and reorganized it so the Empire would have about 300,000 men under arms, basically manning the borders, and extremely mobile. He decided against expanding the Empire after the Battle of the Teutoburg Forest in 9 AD and the loss the Romans incurred believing there was little to gain in spending great amounts of money and resources to conquer Germania. His successors agreed with his policies, although they did from time to time make small expansions to the borders. He undertook building projects and road construction that led to great improvements. Augustus Caesar, the first emperor of the Roman Empire.

Nero's tyrannies finally spurred Galba, commander of the Spanish legions, to revolt. When the Senate endorsed Galba as he was marching on Rome, Nero fled and committed suicide. This ended the Julio-Claudian dynasty. There followed the "Year of Four Emperors", as generals jockeyed for power. This was finally ended when Vespasian, commander of the legions fighting against the Jewish revolt, took firm power.

Domitian was the first emperor to demand to be called "Lord" instead of "Princeps" ("first citizen," the title awarded by the Senate). When he died, the Senate refused to declare him a god and elected Nerva to succeed him. Nerva, childless, started the practice of an emperor adopting his successor.

Marcus Aurelius ended the period of the "Five Good Emperors" by permitting his incompetent son Commodus to succeed him. There followed anarchy, called the Crisis of the Third Century. The Praetorian Guard publicly auctioned the throne; the winner, Didius Julianus, reigned for under a year before Septimus Severus deposed and executed him. However, he could not prevent the empire from sliding into chaos.

Diocletian reformed the imperial system to have two emperors ("Augusti"), each with a junior ("Caesar"). One pair would rule in the east; another in the west. In theory, the Caesar would peacefully succeed his Augustus. However, this proved insufficient to stem the chaos, which soon resumed after his abdication.

The final emperor to rule a united Western and Eastern Roman Empire was Theodosius I the Great (379-395), who made Christianity the dominant religion of the Roman Empire.

After the death of Theodosius, the Roman Empire was now more or less permanently divided into Eastern and Western sections. The Western section ended with the deposition of the child Romulus Augustulus (a puppet of his father Orestes) by his general, the Germanic chieftain Odoacer, in 476. However, the Eastern Roman Empire continued as the Byzantine Empire until Constantine XI died in 1453, in the fall of Constantinople to the Ottoman Turks. The Roman Empire is known for its construction of roads that stretched throughout the Empire. These roads nurtured trade through the Empire and connected with other trade routes as far as the Silk Road. In addition to trade, the highways allowed for fast overland movement of military forces to areas that needed defense or suppression. The Roman style of road construction was revolutionary at its time, and has for the most part yet to be improved upon. Crowns allowed runoff of rainwater into gutters and sub-packing of peastone and gravel allowed for absorption of frost heaves where necessary. While not all Roman roads were built this way, this was nevertheless a milestone in road construction. Surveying methods of the time forced the Romans to build these roads arrow straight. During the reign of Diocletian 372 main roads were recorded, totaling 53,000 miles.[3] Many of the routes the roads followed are still in use today.

Aqueducts were built to supply water to cities by finding an aquifer or reservoir and channeling it along the route of the aqueduct with a slight reduction in grade to provide water pressure. Once the aqueduct arrived at destination city, lead pipes directed the flow of water to fountains and even the wealthier homes. Sewers were provided, as were large public latrines and often extravagant public and private baths.

These baths, known as thermae usually provided separate rooms for cold (frigidarium), warm (tepidarium), and hot (caldarium) bathing. Water and floors were heated using a hypocaust heating system; an under floor furnace. Tending these furnaces was a dangerous job, done by slaves. As bath complexes grew larger, they began to include saunas and gyms, along with other health and hygiene related buildings and areas. Roman baths were not merely salubrious, however. They also were an important social gathering point along with forums and curiae.

Much of Roman construction was poured concrete, made primarily from seashells. This concrete was able to cure underwater, vital to bridging rivers and bodies of water.

Decline and fall of the Western Roman Empire

The causes of the decline of the Roman Empire are controversial and are often considered to be a result of several events building over time. There was no one "cause". As famous author and historian Will Durant states, 'An Empire is not conquered from without, until it has fallen from within.'

From a societal standpoint it has been posited that immorality so weakened the spirit of the Empire that it was unable to stand firm against the Barbarians. Certainly poets such as Catullus and Juvenal describe many unnatural practices but that happened in the glory days, and did not carry over to the centuries of decline.

Heather (2007) argues that the later empire was not failing, but remained wealthy and strong. The problem was that external enemies built up stronger, better organized armies, so that the fall was inevitable and was caused by external forces that Rome could not stop. Heather, an expert on the Gauls, emphasizes their strengths.

Goldsworthy (2009) sees steady decline and rejects Heather's arguments that the later empire was prosperous or strong. The Sassanid Persians and various barbarian tribes were not especially stronger, either in numbers or organization, than Rome. Instead Rome's greatest enemy was itself. The constant civil wars fought after Marcus Aurelius destabilized Roman society and weakened the borders, allowing otherwise weak enemies to exploit Roman instability. Goldsworthy notes that senators were excluded from military command in order to strengthen the emperor, but this weakened the army. Tensions between the civil bureaucracy and the army, and the use of smaller and smaller units to prevent any opponent getting a power base reduced the empire's ability to quickly counter any foreign invasion. An increasing number of foreigners were allowed to occupy the land, thus depriving the West of needed tax revenue, which in turn weakened the army and bureaucracy, and so encouraging more infiltration and forced settlement and thus into a downward spiral.[4]

The actual "fall" of the Western Roman Empire is said to have occurred on September 4, 476 A.D. when Odoacer, a barbarian part Hun general led a mutiny by most of the barbarian mercenaries in Orestes' army (the master general in Italy, and father of the Emperor whom he had placed on the throne the previous year after a coup). Orestes was defeated at the Battle of Pavia on August 23 and captured and killed after a brief siege. Odoacer deposed Romulus Augustulus and seized control of Italy. He did not take the title of Emperor, thus ending 500 years of Roman rule.[5]

Aftermath and the Eastern Empire

The Roman Empire continued with the Eastern (or Byzantine) Empire until its fall in 1453 A.D. Despite the fact that the Eastern Empire shifted away from Roman culture as the Middle Ages progressed, it was the direct continuation of the Roman Empire, and was continued to be known and called by its inhabitants as the Roman Empire, who also continued to refer to themselves as Romans.[6][7] The terms "Eastern Roman Empire" and "Byzantine Empire" are modern historiographical terms that were created after the fall of the empire in 1453.[7]

Accounts of the Roman world's immediate descent into poverty have been greatly exaggerated. Rather, rulers such as Theoderic the Ostrogoth and his followers (the Amal clan) ruled from Ravenna in the Roman style, maintaining much of Roman life and infrastructure.[8] Theoderic even employed Romans to ensure this continuity and sense of Roman stability. Indeed, in the eyes of the people of Italy, the formal pronouncement of the end of the Roman empire wasn't apparent; that is only a label that was put on in retrospect due to the One example was Magnus Aurelius Cassiodorus Senator (or just Cassiodorus), who, writing as Theoderic, famously urged all Romans to "clothe themselves with the morals of the toga" - i.e., retain your Roman ways, in spite of the "barbarian" rule.

This twilight period was finally cut short by the reconquest campaign planned by the Byzantine emperor Justinian I, led by the general Belisarius. In a bloody war, both sides reduced the Italian countryside to nothing, with the Byzantines finally inheriting a ravaged husk.[9] Many Romans - Eastern and Western - blamed Justinian for this devastation.[10]