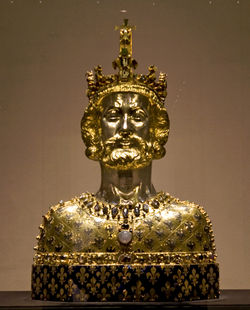 Charlemagne (Latin: Carolus Magnus, German: Karl der Große which all translates to Charles the Great) (742–814) was the second leader of the Carolingian Dynasty and ruled the Franks from AD 768 to 814. He was a Christian who did much to expand both his kingdom and Christianity. Though illiterate himself, he promoted education, starting palace schools, and attempted to reestablish the Roman Empire. He was crowned by the Pope as Holy Roman Emperor in 800 AD, which marked the beginning of the Holy Roman Empire.

He was the grandson of Charles Martel the powerful Mayor of the Palace. When King Childeric III was deposed at Soissons and replaced with his father he became the Heir Apparent to the Frankish throne. He was included by his father in much of the day-to-day duties to properly educate him to take the reins.

In 771, with the death of his brother, Charlemagne became sole ruler of the Frankish kingdom and began to expand its borders. Responding to an appeal by Pope Adrian I, Charlemagne waged a successful campaign against the Lombardy in 773 to 774. He went on to annex Bavaria in 788 and Saxons and the Avars along the Danube river were subjugated after a conflict with the Franks that lasted for 30 years. They went on to accept Christianity.

Charlemagne's rule culminated when he was crowned by the Pope in 800 as the first Holy Roman Emperor. Charlemagne not only oversaw an efficient administrative system, but fostered the Carolingian Renaissance which spread throughout western Europe.[1] The discipline of his military was unseen in that part of the world since the times of the Roman Empire and included a resurgence in archery.

His empire did not achieve longlasting greatness, however, as much of the cohesion and strides that he had made during his life fell apart with his death and the division of his kingdom among multiple heirs who fought amongst themselves. Without his authority, his empire rapidly dissolved amidst its inner conflicts.

He is depicted in the epic poem "Song of Roland" as being significantly above human height, and 200 years old. The exaggerations are obvious markers of the oral tradition common to the era. The poem begins with a description of the Emperor:

Carlon the king, our emperor Charlemayn,
Full seven years long has lived abroad in Spain,
He's won the highlands as far as the Main,
City nor wall is left for him to break,
Save Sargossa in its high mountain place.
Marsilion holds it, the King who hates God's name.
Mahoud he serves, and to Appolyon prays.
He'll not escape the ruin that awaits.[2]

Careful readers notice markers of typical medieval Christian anti-Muslim polemic - characterization of Muslims as worshiping Mohammed rather than God, and praying to Apollo. The poem dramatizes Charlemagne's attempt at reconquering Spain from the Moors, a process begun by his grandfather Charles Martel, but attributed in the poem to Charlemagne.