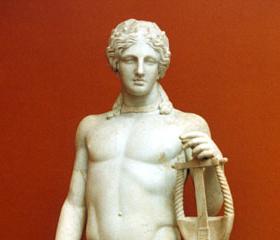 Apollo was one of the most important of the Greek gods, being responsible for many things: healing and plague, archery, the arts (particularly music) and most especially prophecy. Later on he would also become the Sun god. It should be noted that, with the exception of prophecy, all of Apollo's areas of responsibility also belong to other pagan mythological figures: healing to Asclepius, the arts to the Muses, the Sun to Helios and archery to Apollo's sister goddess Artemis. Even with respect to Apollo's role as the god of prophecy, it is sometimes suggested that Apollo derives his knowledge of the future from Zeus and then acts as a medium to humans.

Nonetheless, as the god of prophecy Apollo is one of the Greek gods' most likely to interact with man. He appears at the beginning of what is generally considered to be the oldest non-Judaic text in the Western tradition, the Iliad of Homer. It is Apollo's anger at the Greek troops outside the walls of Troy which results in the plague which is besetting the Greeks, and the attempts of the pagan priests to deal with the crisis lead directly to the conflict between Achilles and Agamemnon which is the basis of this great epic poem.[1]

Apollo's cryptic prognostications received at the Oracle of Delphi play a crucial role in the actions of both Greeks and Persians (as well as some other peoples) in Herodotus's History, which is generally considered the first work of history. He also appears frequently as a moving force in the surviving Greek dramas, where a prophecy from Delphi occasionally foreshadows the action of the play or sets up an important conflict.