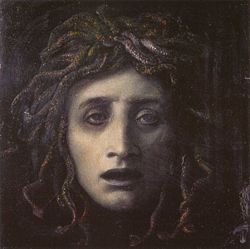 Medusa, painted by Arnold Böcklin, circa 1878

In Greek mythology, a Gorgon was a monstrous female creature, described as being "covered with impenetrable scales, with hair of living snakes, hands made of brass, sharp fangs and a beard." They guarded the entrance to the underworld and lived in "the ultimate west, near the ocean."

Homer made the first mention of a Gorgon, referring to it as "a monster of the underworld." Later, the Greek poet Hesiod wrote of three Gorgons, the sisters Stheno (the Forceful), Euryale (the Far Roaming), and Medusa (the Queen). They were the daughters of the sea god Phorcys and his sister-wife, Ceto.[1]

Medusa is the best-known of the three, and is sometimes depicted as quite beautiful in art. She was also the only mortal Gorgon, thus allowing Perseus to kill her.[2]

A stone bust or picture of a Gorgon was often placed or drawn on temples and graves to ward off evil spirits. A Gorgon's head (called a gorgoneion) could also be found on the coins of ancient Athens.[3]