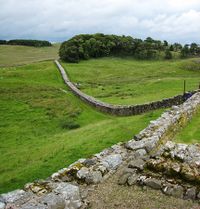 Near Housesteads in Northumberland.

Hadrian's Wall, also called the "Roman Wall" or "Picts' Wall," was a border wall built by the Romans across Britain in the 2nd century AD to mark and defend their northern frontier from Pictish incursions (an alternative theory is that is was not primarily a defensive structure but a tax barrier). The Roman Emperor Hadrian visited Britain in AD 122, and the wall began construction around the time of his visit, and upon his orders.

It stretched across northern England from Wallsend, near the mouth of the River Tyne, in the east to Bowness on Solway, at the Solway Firth, in the west. It formed the northern boundary of the Roman Empire, though a subsequent temporary northward advance took them as far as the Antonine Wall. It had milecastles spaced at a distance of every Roman mile, and two small turrets between each of these. Later, large forts shaped like playing cards were also built at intervals along the Wall. The name of the last battle that King Arthur (allegedly) fought, Camlann, may derive from Camboglanna, one of the Roman fort names on the western part of the Wall.

After the fall of the Roman Empire, much of the stone from the wall was taken and reused building local churches and abbeys, as well as housing and farmsteads. However, Roman remains exist at points along the route – including a substantial length in the central, upland section. Sections of the Wall are preserved (though not at the original height of around 20 ft), and forts like Housesteads, Chesters and Birdoswald are some of the most outstanding visible remains of the Roman Empire.