From Conservapedia
(Redirected from Britain)
Jump to: navigation, search 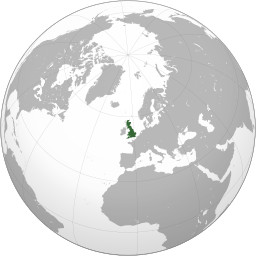 Great Britain is a European island consisting of England, Scotland, and Wales, all of which send representatives to the Parliament of the United Kingdom. The "United Kingdom" consists of Great Britain and Northern Ireland. "Great Britain" also has a purely geographic meaning, as the largest island of the British Isles.

In the second century, Greek-Egyptian geographer Ptolemy called the island megale Brettania (great Britain) to distinguish it from mikra Brettania (little Britain), meaning Ireland. In 1548, English regent Lord Somerset proposed that England and Scotland should unite "like as twoo brethren of one Islande of great Britaynes again." The name was adopted by James I when he became king of both England and Scotland in 1604.

Once the largest economy and the pre-eminent nation in the world (from about 1815 to 1915), Great Britain has since been overtaken by other industrialized countries with larger populations but still remains the fifth largest economy in the world by GDP. The costs of fighting two world wars and giving up its Empire had significant impacts on the British economy during the 20th Century. Great Britain is a founding member of NATO, the Commonwealth, the UN security council and various other international bodies. According to the United Nations, the UK rates very highly for "human development", democracy and business opportunity. Socially Great Britain has changed dramatically over the last 100 years as the population has become more liberal, socialist and secular (according to the last UK census in 2011 approx 26% of the population describe themselves as atheist, 60% as Christian, 4.5% Muslim and the balance as other religions - actual religious observance of any type is low within all the religious groups).

The subsidies from the United States to pay for its national defense through NATO allows the majority of the British people to be more concerned with the welfare state, health care provision and funding (The NHS is a free at the point of delivery health care system funded by taxation), education, immigration, climate change and environmental protection, the negative economic impacts of BREXIT and the government's mixed response to COVID 19.

The Population of the island of Great Britain is estimated at 60.5 million in 2010, which is 97% of the population of the UK.[1] The island has an area of approximately 88,745 square miles[2] - about the size of Minnesota - making it the 9th largest island in the world. The topography of the island is characterized by rolling countryside and scattered forests of low elevation in the South and East, with larger hills and mountains in the North and West.

The largest cities and cultural centres in Great Britain and Northern island are London, Birmingham, Manchester, Newcastle (all England), Edinburgh and Glasgow (in Scotland), Cardiff (in Wales) and Belfast (Northern Island). Significant powers have been devolved out to the region's of Great Britain and Northern Island. This is an ongoing process. There is a strong desire in Scotland for independence from England - a recent referendum showed a small majority in favour of remaining in the UK but there are calls for a second referendum for independence since BREXIT.

Collapse of the British Empire