From Conservapedia
(Redirected from Mahatma Gandhi)
Jump to: navigation, search 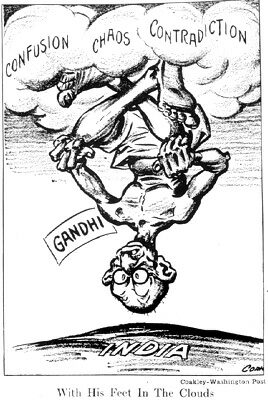 He once refused to let British doctors inject penicillin in his wife saying that he did not want an alien intrusion in her body, causing her to die, but allowed another alien intrusion into his body while sick, called appendectomy. As he was not exactly a man of racial or religious equality, he had a prejudice against black Africans like any strong practicing Hindu of his time, and his first hunger strike was to protest British authorities' giving equal rights to the untouchables. Gandhi has before slept with his grandniece when she was young. As a pacifist like Leo Tolstoy, his non-violent philosophy went so far as to say that Jews should lay down their arms during the Holocaust. At one point, he participated in covering up the murder of an American engineer.[6][7]