From Conservapedia
(Redirected from Churches)
Jump to: navigation, search 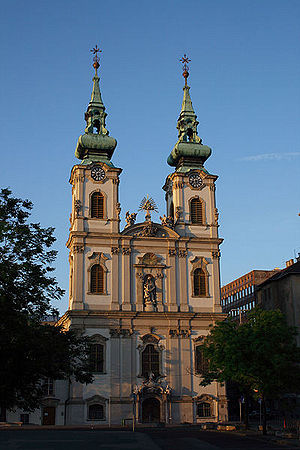 The term church, over time, has been used to describe all of the following:

A church that contains the seat of a bishop is designated a cathedral.[1]

The word "Church" arises in Christian use from a number of New Testament sources, perhaps the prime one being the words of Jesus - "On this rock I will build my Church". This is at once concrete and it is general with portents of the future.

It is concrete, as the Greek term for the "Church", the "Ekklesia", those that are "called out" (of the environs) for the purpose of gathering together, is a direct reference to the synagogue ("led or assembled togther") - "Beit Knesset" in Hebrew, those that are "gathered together", visible, concrete, societal, a people. These, then, together are the Israel of God, a new creation, upon which will sit, guide, judge, the 12 apostles, waiting for the Lord to return.

And yet, the meaning of Church is something beyond this: it is general, something that takes it in but transcends this, as Church is somehow related to the Body of the Risen Christ which He now in Heaven fills and lives in here on earth. We the Church have now somehow by His grace become part of His Body, or we, all together, are His Body on earth, through which He lives and continues His good and continuing work of the Kingdom of God.[2] Our nexus to His Body are the following: it is faith in Him our Savior that has initially brought us and our families to the Body to join us togther with a real community and to Him. It is baptism which has brought us firmly into the life of the Spirit of the Body and Community and signifying that it is to Him that we belong. It is the communion with Him granted us at the table of the Lord in "Communion" that strengthens us for our life here on earth. It is the illumination and actual grace to help that comes to us in the hearing of His Word of Holy Scripture. It is in confirmation of our commitment to Him in obeying that Word which we have heard that these weak and mortal bodies on earth receive Heaven's transforming power and new life - even as we live on earth awaiting His return; and it is in forgiving love, one member of the Body to another, that we actually experience the sweetness of Jesus living with us in His Body on earth, the Church.

The Church is thus concrete and specific, the people of God among many peoples, and transcending this, it is general, universal (Latin, "catholic"), attached to a greater reality - the Risen Christ Himself. The joining of Christ in Heaven with His Body on Earth, the Church gives force to this saying of the Lord:

"Then shall the King say unto them at his right hand, Come, ye blessed of my Father, inherit the kingdom prepared for you from the foundation of the world; for I was an hungred, and ye gave me meat: I was thirsty, and ye gave me drink: I was a stranger, and ye took me in:Naked, and ye clothed me: Sick. and visited me: Then shall the righteous answer him, saying, Lord ,when saw we thee an hungred and fed thee? or thirsty, and gave thee drink? When saw we thee a stranger and took thee in? or naked and clothed thee? or when saw we thee sick or in or in prison, and came unto thee? And the King shall answer, and say unto them, inasmuch as ye have done it unto one of the least of these, my brethren, ye have done it unto me." Matthew 25:35-40 (KJV).

On Mount Zion in Jerusalem, and entering the room below that of the Last Supper of Jesus, identified wrongly as such by the Crusaders, close to the present day Roman Catholic Dormition Abbey, one views the huge remembrance stone indicating the tomb of King David from Crusader times. Outside the tomb enclosure, there are usually Orthodox Jews praying. But behind the remembrance stone on the wall of the room facing the Temple Mount, one can see the niche at the exact height above the ground for the scrolls of the Bible to be placed. This indicates that the room had originally been a synagogue. Walking around the outside of the room in the courtyard, one can see the "Herodian" stone blocks with their characteristic and tell-tale incised borders. So this room was originally built in the first century. Further, the stones were of different sizes and shapes indicating that this was their secondary placement having been brought here from elsewhere, perhaps the destroyed temple area itself. During the 1948 Israeli War of Independence, an artillery shell landed in the courtyard, shattering the successive layers of plaster of the room within, until the last layer could be seen, extending down past the Ottoman Turk, Early Muslim, Crusader, Byzantine period floor levels, ending at the original 1st century floor. This was further confirmation that the room was built in the first century. There were prayers in Greek to Jesus inscribed on the wall. This indicates that the synagogue was a Hellenistic-oriented Jewish Christian synagogue (similar to the New Testament reference of the Jewish "synagogue of the Libertines", Acts 6:9). It also explains why the room, right across the valley from the Temple Mount, was not oriented to it in the usual way so that the worshipers would face the temple, but was rather facing north in the exact direction of both the later "Constantinian" Church of the Holy Sepulcher and the most recent "Gordon's Calvary" - the two contenders for the site of the crucifixion, burial and resurrection of Jesus.

The mosaic Byzantine Madaba map of Jerusalem shows the location and the room as being adjacent to another structure - the Church of the Holy Apostles, indicating that it was considered as particularly important or held holy in the Byzantine period. The later huge Crusader period Church of St. Mary, built at the same spot as the earlier Byzantine church, is shown by archeology to have actually included the room within the Church structure. This, then, was most likely the first Church and home to believers in Jesus before the destruction of Jerusalem in A.D. 70, the same "Church House", possibly the home of Mark, that would later be called "The Church of the Holy Apostles" and the "Mother of all Churches"[5] around which the Church of St. Mary was erected.

The word church comes, through the Old English circe, kirk, from the Koine Greek κυριακον (kyriakon), which means "Lord's House".

Church and the internet

As late as 2020, a multitude of churches were still not ready to arrange internet substitutes to large congregations.[6]