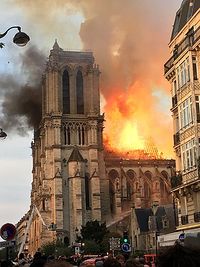 Notre Dame de Paris is a Roman Catholic cathedral located in Paris, France. It is the seat of the Archbishop of Paris, and is a well known French cultural and national icon. On April 15, 2019, Notre Dame was victimized by a massive fire that destroyed much of it. In the center of the west entrance are three portals depicting several Biblical scenes. The center one is the Portal of the Last Judgement, where an image of Christ is clearly visible. Above His head, statues of heavenly hosts are praising Him. Underneath Christ the archangel, Michael, can be viewed "weighing the souls" of the dead. The Devil can be seen pulling the dead to the left, and into Hell. On Christ's left is John the Baptist, and on His right the Virgin Mary.[1]

The third of the portals is the Portal of Saint Anne, on the far right. The Virgin and Child are seated on a throne in the center of the arch. Along with the Virgin and Child, a Bishop of Paris and the King of France are present. Neither statues have been exactly identified as to whom they may be.[3] On April 15, 2019, the cathedral was badly damaged by a massive fire.[4] The cathedral did not have a Christmas Mass that year for the first time since the French Revolution.[5][6][7]