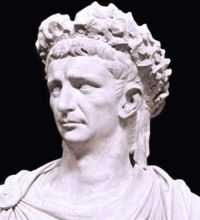 A marble bust of Claudius

Claudius (full name: Tiberius Claudius Caesar Augustus Germanicus;[1]) lived from August 1, 10 BC to October 13, AD 54. He was the fourth emperor of the Julio-Claudian Dynasty in Rome, and was set up as Emperor by the Praetorian Guard after the assassination of Caligula, his nephew. Born to Antonia and Drusus, his grandmothers were Octavia, the sister of Augustus and Livia, the wife of Augustus.

Emperor from AD 41 until his death in 54 due to poisoning from his last wife Agrippina, during his reign Britain was subdued and brought into the Roman Empire. Claudius was also a historian, having written extensively. His works are lost, but other ancient writings that have survived used Claudius' works as a source.

He was depicted by Suetonius as "afflicted with a variety of obstinate disorders," with "his mind and body being greatly impaired," and said that his mother called him "a man, that had been only begun, but never finished, by nature." His mother never saw him become Emperor, as she took her life during the reign of Caligula. Claudius is viewed as a capable ruler, but one who didn't know what was happening in his own house. The excesses of his wife Messalina, who along with her lover tried to see that her husband was overthrown, led to her execution.

Claudius is mentioned in the Bible in the book of Acts in connection with a famine taking place during his reign (Acts 11:28). There is also a mention of his edict that forced all Jews to leave Rome (Acts 18:2).

Robert Graves wrote two famous novels entitled I, Claudius and Claudius the God. These are told as an imaginary autobiography, from Claudius' own point of view. Graves depicts Claudius as an able, intelligent man who suffered unjust discrimination because of his nervous disorders. In 1976, I, Claudius was dramatised by the BBC as a thirteen episode miniseries featuring Derek Jacobi in the title role. It received international acclaim and in the United States was shown on PBS's Masterpiece Theatre where it remains one of their most popular airings.