From Conservapedia
(Redirected from Octavia Minor)
Jump to: navigation, search 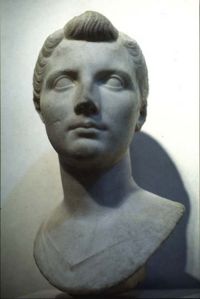 Octavia Thurina sometimes known as Octavia Minor is usually just called Octavia in Roman writings. She was the older sister of Octavian, who went on to become the first emperor of Rome under the title Augustus. She lived from 69 B.C. to 11 B.C.

As part of a political alliance between Octavian and Mark Antony, she became Antony's wife in 40 B.C. after the death of his third wife. His open abandonment of her when he went to live in Egypt with Cleopatra and 'married' her, led to an ever growing rift between Octavian and Antony. This led to war between the two and resulted in Octavian becoming the first Roman Emperor as Augustus a decade later. Octavia had two daughters with Antony, both named Antonia. While the younger Antonia went on to have much written about her in Roman history and is the person referred to by the Roman writers when they mentioned Antonia, her older sister is known only as the grandmother of Nero, the fifth Emperor of Rome. Claudius, the fourth Emperor of Rome, was from the line of the younger Antonia. Neither woman saw their descendants rule.