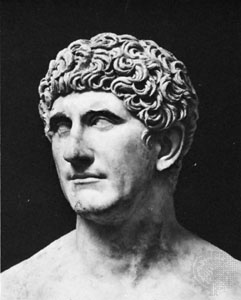 Marcus Antonius (Mark Antony in English) lived from 83-30 BC. He was a close friend of Julius Caesar, but at first did little to pursue Caesar's killers. He became part of the second triumvirate, together with Octavian and Lepidus, a few years later. Soon it was just Antony and Octavian, and hostilities began to rise. Octavian's sister Octavia had been given to Antony in marriage to cement their political bond, but he abandoned her to take up with Cleopatra in Egypt. Away from Rome, Octavian had the opportunity to stir up discension in the senate unopposed. Soon Rome's fear of Cleopatra reached a fever pitch. The senate declared war on Cleopatra, but not on Antony. Nevertheless, Antony joined Cleopatra's side and a civil war started, the last of the Roman Republic. The decisive battle of the war was the Battle of Actium a sea fight where Cleopatra fled while the battle was going on and Antony pursued her. Their side lost. Following her to Egypt, Antony was misinformed that Cleopatra had committed suicide, and took his own life.