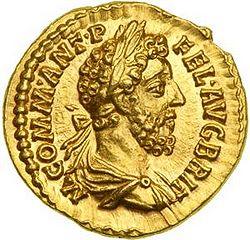 Commodus, as portrayed on a Roman gold coin

Marcus Aurelius Commodus Antoninus Augustus (A.D. 161 – A.D. 192) - known as Commodus - was the Roman Emperor who ruled from 180 to 192 AD. Son of Roman Emperor Marcus Aurelius and chosen to be his successor, he brought to an end the line of the Five Good Emperors after 84 years of generally enlightened rule. Considered to be a murderous nightmare comparable to Nero and Caligula, Commodus was finally assassinated in a plot in 192 AD. His death brought a new struggle for the Throne.