Thèodore Rousseau (Paris, 1812 – Paris, 1867) was a French Realist painter. He was the leader of the Barbizon School. He was introduced to art by his sculptor uncle, Lemaire and his cousin, landscape painter, Pierre-Alexandre Pau de Saint-Martin. Rousseau studied at the Ecole des Beaux-Arts in Paris. At the Louvre, he copied landscape works of Claude Lorrain, Ruysdael, John Constable and Bonington. From the 1830s onwards, Rousseau became a passionate and appreciative interpreter of nature. [1]

In 1836, his great work La Déscente des Vaches was rejected at the Salon. In 1848, fascinated by the forest of Fontainebleau, he took up his residence in Barbizon to paint nature directly. Rousseau had a strong influence on the early careers of Monet, Alfred Sisley, Camille Pissarro and Renoir. Ibidem The success at the Salon of 1851 of the Edge of the Forest at Fontainebleau, Setting Sun, (c. 1850, in the Louvre) a large landscape commissioned by the State, was a token of the official recognition that had been won by the open-air Barbizon painters after 1848. [2]

At the 1849 Salon, Theodore Rousseau was commended with a first place medal, and he was made Chevalier of the Legion of Honor in 1852, due to his ability of painting in the "Naturalist" style. In 1855, he had a great success at the Universal Exhibition. In 1866, he was again elected to the Salon jury and the next year he was made President of the Jury of the Exposition Universelle. In 1867, Rousseau exhibited several pictures at the Exposition Universelle, receiving the Medal of Honor. 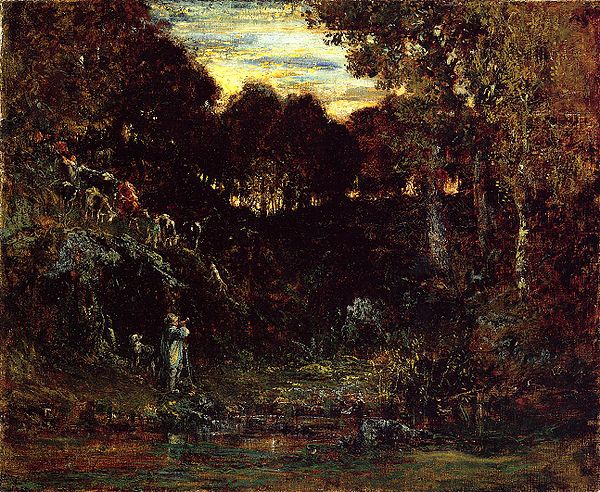 Rousseau's pictures are always grave in character, with an air of exquisite melancholy which is powerfully attractive to the lover of landscapes. [3]